It’s that time again, as we inch closer towards the first semi final of Eesti Laul. Last year brought both the wierd and wonderful to our attention, Winny Puhh being a prime example. Ten acts are reduced to five this Friday; it will be interesting to see if Estonian viewers have tastes as eclectic as the line up.

Friday’s first semi final will certainly be an interesting affair, both musically and visually. Many of the acts in the running have considerable experience from the music industry, but among the generally unknown names for foreign viewers, there are two names that should be more recognisable. Lenna is back for her third attempt, this time with her band. She has come second twice solo, so is no doubt looking for revenge. Kõrsikud took part in last years preselection, coming fourth in the final. Their most recent album has been performing very well on the domestic charts, so will their established name be in the forefront of the collective minds of the audience, translating into votes? Join us in getting to know the first ten contenders a little better. 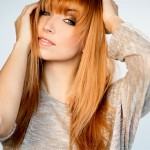 Tanja or Tatjana Mihhailova was born in the former Soviet Union, in Kaliningrad on June the 19th, 1983. She has lived in Estonia since early childhood and from a very early age she also began to take part in numerous singing contests. She won the Utrennaja Zvezda contest in Latvia in 1998 and also participated in the Fizz superstar 2002 Baltic competition. Before her solo career, Tanja made up one half of the duo Nightlight Duo in the early noughties. They released two albums, one of which Miks ma ei suuda su maailma muuta (Why Can’t I Change Your World?) won the album of the year award in 2002. The duo participated in Eurolaul on two occasions, in 2002 and 2003, coming second in 2002 with Another Country Song. Nightlight Duo disbanded in 2004 and in 2005, Tanja put together a new outfit named Jz Belle working together with writers, composers and producers Timo Vendt and Mihkel Mattisen, releasing a further two albums. A stint in the combo Sunday Mood brought Tanja further recognition across the Baltic with the release of an album Something More in 2009. Besides her recording career, Tatjana has also starred in a number of productions and shows such as Queen – The Doors of Time together with Rolf Roosalu, Tribute to Beyoncé and many more. She has entered two TV competitions previously, coming second in both; Laulud Tähtedega and Laulupealinn in 2011. 2014 will be her first time performing as a solo artist in Eesti Laul. 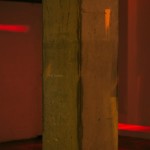 The Titles are a band from Tallinn consisting of Markus Rafael Nylund on vocals, Rasmus Lill on keyboards, Martin Laksberg on bass, Liis Ring on guitar and keyboards and Tõnis Kuusk on drums. Rasmus and Markus have been playing gigs in and around Tallinn for quite some time, gaining invaluable performing experience. They describe themselves as a synthrock band that makes catchy pop songs with a darker edge. With their eclectic sound, they refuse to compromise. Markus is originally Finnish-Canadian, and has performed on his own to a great extent with various projects such as Sunlight Heart in 2012. He is an accomplished guitarist and pianist. Rasmus Lill has performed in bands such as Kosmofon and Zebra Island. Martin has also been performing solo, taking part in Tallinn Music Week amongst other things and besides performing with The Titles is currently working on his solo album. 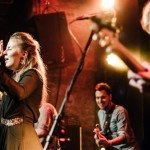 Wilhelm are a band comprising seven members; Anett Kulbin and Kaisa Lillepuu on vocals, writer and composer of their entry Resignal, Lauri Kadalipp on ukulele, Paul Neitsov on guitar, Jorven Viilik on bass and Kristjan Mängel on drums. They all are based in Tartu and decided to form Wilhelm out of their collective love for making and playing music and a burning desire to get their music out to a wider audience. Their style can most aptly be described as indie pop with a jazz influence. Vocalist Anett Kulbin has a background in jazz, having studied at the London Music School. Lauri Kadalipp has studied at the Heino Elleri Nimeline School of Music in Tartu. 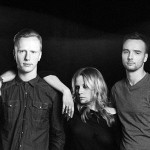 State of Zoe is a five piece band that hails from Talinn and they are currently signed to the Kimomo record label. The band line up features Anneliis Kits on vocals/electronics, Talis Paide on keyboards/electronics, Raul Ojamaa on guitar/electronics, Siim Avango on bass and Caspar Salo on drums. State of Zoe was formed in August 2010 by producer Sander Mölder as a collaboration with vocalist Anneliis under the name Stereo Spectrum. Their music is generally classified as electronic pop, but they incorporate a great deal of jazz, pop and soul into their music, citing Roisin Murphy and Stevie Wonder as just some of their influences. Tracks that the band have previously released include The Hereafter, Can’t Reach You and Two Ways We Fall and they have also made numerous appearances at Tallinn Music Week, never failing to impress. 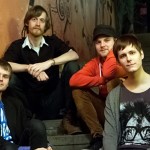 NimmerSchmidt is an electropop duo formed in Tartu in early 2013, the name being a combination of it’s members’ surnames. Andero Nimmer and Fredy Schmidt are the two talented musicians who came together after performing with various projects such as indie rock band Animal Head and Laika Virgin. Their first single Öisel järvel (Midnight lake) was released in April 2013 and since then the duo have been extremely productive, releasing a string of singles such as Eelmise suve saladus (Mystery of last summer), Pilvelõhkuja (Skyscraper) and their single Palmisaar gained considerable airplay on Raadio2, becoming one of the most played singles. They made their live debut in their hometown of Tartu in September 2013 where they were joined by Kalle Kindel and DJ Roland Viljat. Their debut album Kirgede torm (Storm of Passion) appeared in January this year, consisting of ten tracks and mixed and mastered by Martin Kikas and Lauri Liivak. 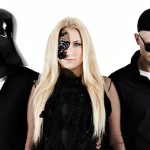 Vöörad is a trio that hails from the island of Saaremaa and consists of Priit Uulstund, Meiko Umal and Tuuli Rand. All three members have a wide range of varying music tastes, and together they merge the genres of electronica, rap and pop. The trio wishes to create music that doesn’t conform to the basic need of society of pigeonholing everything, giving everything a convenient label. Meiko Umal has performed under the guise OkYM Riim, releasing two albums: Kirjad aguli seintel (2010) and Brodmani 14 (2012), using experimental rap as his medium. Tuuli Rand may be familiar to some – she took part in Eesti Laul last year singing Ring the Alarm together with Teele Viiraga, coming last in the final. She has studied at the Goerg Ots School and has provided vocals for a range of bands, from TuuliKustiPeep, Funkifize, Bliss, Estonian Dream Dixieland Band, to the vocal ensemble Söörömöö. She has also previously appeared like many of her counterparts in the television talent show Eesti Otsib Superstaari. Priit Uulstund also wrote the entry Ring the Alarm together with Teele Viiraga. 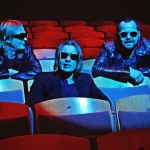 Super Hot Cosmos Blues Band is a trio consisting of Janno Reim aka Cosmos Jay-Ray and Ilja šarapov on guitar and vocals and Mati Sütt on bass guitar. According to themselves, the band came about by accident having made music and performed independently on the Estonian music circuit for many years. They knew of each other but hadn’t met – the band came about when the trio got together and began jamming. Their band name they say "was the only cool band name available." As a trio, they are relative newcomers to the scene, telling that their influences include a distinct blues sound. This is their firs time at Eesti Laul, which they are extremely enthusiastic about, hoping to use the marvellous opportunity to get their music out to a wider audience. They did however have one rule of thumb before deciding to participate in Eesti Laul : to do their own thing and not take on a different style just to please people. 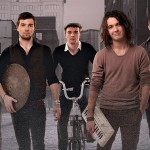 Names can be deceptive, as is the case with August Hunt, which is actually a band, not a solo artist! The line up features Norman Salumäe on vocals, Martin Petermann on percussion, Siim Avango on bass guitar, Harri Uljas on guitar and Mirko Miilits on guitar. They formed in 2010 and haven’t looked back since. Their chief aim was to make music in Estonian without any boundaries, and that’s just what they’ve achieved, relying on a vibrant mix of funk, garage and rock to name but a few genres. Their debut album Meie aeg on käes (Our time has come) appeared at the end of 2011 and was much lauded by both fans and critics alike, producing two singles Thomas Malthus on surnud, mu arm and Tantsulõvi and the video to their first single became a huge success. August Hunt are no strangers to Eesti Laul; they entered with Tantsulõvi in 2012, making it to the final, finishing eighth. Norman Salumäe will also be participating as a solo artist in the second semi with his self penned entry Search. 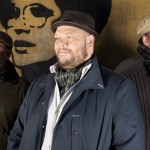 Kõrsikud is a band that was formed in 2012 and that features Andrus Albrecht (stage name Bonzo), Alari Piispea (stage name Päss) and Jaan Pehk (stage name Orelipoiss). The band name came about as a result of irony; given the rather portly stature of the band members, the name is taken from a thin biscuit. The three are based in Tartu, Tallinn and Rakvere and together they have released three albums to date: Kolme Peale (On Three) in 2012, Sinu südames (Your Heart) and Heli jälgedes (Sound of Footsteps) both released in 2013, all of which have performed very well commercially. They took part in Eesti Laul last year with Suuda öelda ei (Unable to say no), making it to the final and coming fourth and so hope to up their game this time around with their entry Tule ja jää (Fire and ice). 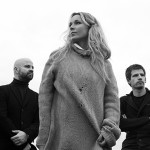 Lenna Kuurmaa was born on the 26th of September, 1985 in Tallinn. Aged just five, she joined the ETV Lasteekraani Muusikastuudio choir, touring extensively. She stayed with them for twelve years, where she received vocal training. She participated in the TV singing contest Fizz Superstar, making it to the quarter finals. 2002 would be a decisive year for Lenna, as it was the year she formed the rock band Vanilla Ninja (Switzerland 2005, Cool Vibes) with friends. The band enjoyed massive success but chose to take time out in 2009. Since then, Lenna has continued on various other projects, and launched her solo career in 2010. Her debut solo album Lenna also appeared that same year. Lenna is a familiar name when it comes to Eesti Laul – as part of Vanilla Ninja, she took part with Club Kung Fu in Eurolaul in 2003, coming in last place. They gave it another shot in 2007 with Birds of peace but failed to make it to the final. Lenna participated as a solo artist for the first time in 2010 with the song Rapunzel, coming second. After taking a year off, she was back again in 2012, only to come second again behind Ott Lepland with Mina jään (I’ll stay). She’s hoping to go all the way this year with her entry Supernoova.