The most successful Sanremo Music Festival of the last 11 years ends tonight with its Grand Final. After four nights of live performances, music, stand up comedy, and guests, The most popular selection in Europe comes to an end tonight in Teatro Ariston. In the end of the night we will find out who will be representing Italy in Stockholm.

Carlo Conti and RAI are more than happy with the success of this year’s Sanremo Music Festival. Sanremo 2016 has had the highest ratings in 11 years for the first four nights. With a share of 49,7% on the first night and more than 11 million viewers every night. Even the DopoFestival or AfterShow that takes on where the festival ends with artists and journalists as a live talk show is gaining audience night after night. Sanremo is a success also on social medias. The first three nights generated over 500.000 tweets for a total of 1,7 million tweets during the three nights. What a success! 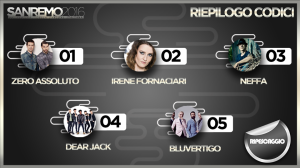 In tonight’s final the 15 artists who made it through tonight’s grand final will perform their entry once again for the last time. They all qualified from yesterday’s semifinal. One more artist will be added to the finalists from the five artists who did not get enough votes yesterday and entered the repechage round. The public has been voting since the end of last night’s semifinal, the lines will be open until the show starts. Then, the one with the highest number of calls will join the 15 qualified entries:

The winner of Sanremo 2016 will be determined in two rounds of voting. The 16 songs that made it to the Grand Final will start from zero, with all previous votes not counted. The voting will be: 40% televote, 30% expert jury and 30% demoscopic jury. Only the Top 3 will be announced and the acts will be asked to perform again. with the same voting procedure of 40-30-30 and starting at zero votes once more. In the end, the ranking will be revealed and we will have a winner and most likely the Italian participant for the 2016 Eurovision Song Contest to be held in Stockholm, Sweden next May.

As RAI has already announced the winner of the Campioni category will have the right, just as last year, to represent Italy in the upcoming Eurovision Song Contest, but not necessarily with the winning song. If the winner doesn’t wish to represent Italy in the Eurovision Song Contest, RAI will select another artist who took part in the Campioni division of Sanremo.

Carlo Conti will present the show as usual, together with Virginia Raffaele, Mădălina Diana Ghenea and Gabriel Garko. In addition to the performances of the competing entries, guest performers will include Renato Zero, Cristina D’Avena and Willy William. Other guests include ballet dancer Roberto Bolle and actors Guglielmo Scilla and Giuseppe Fiorello. Sanremo’s Grand Final starts at 20.30 CET and you can watch it live on the Sanremo official site.

Below you can watch our compilation of the last 5 years of Italy in the Eurovision Song Contest as we wait patiently to find out who will represent Italy in Stockholm.