Two weeks before the final of the Junior Eurovision Song Contest 2015 in Sofia, Ireland decided its entry in the contest. The Irish national final, which was recorded in September, aired today on TG4. A total of 6 acts competed to represent the country in its debut.

Ireland was the only country from the 17 participants in this year’s contest, that hadn’t announced its representative for Sofia yet. The Irish national final was recorded in September and the winner was already decided, but not revealed until today. Six acts competed for the right to represent Ireland at their first appearance in the Junior Eurovision Song Contest. Four of them were the winners of the 4 semifinals that the Irish speaking national broadcaster TG4 held before, and two were chosen from the jury as wildcards among those who didn’t qualify.

The line-up for the show looked as it follows:

The first artist to perform tonight, was Zena Donnelly. She is 13 years old and she is born in Dublin. Her song is called I d’Aonair (All by myself). She wrote the song herself. She explained that she dedicated the song to one of her classmates who was getting bullied. A very strong contestant for the beginning of the show. Great comments from the jury.

Lisa-Rose was the second on stage. A pop dynamic-dance song. Lisa knows how to sing, but feel uncomfortable on camera. However she got a big applause in the studio. Lisa-Rose’s song is called Bris amach.

Another ballad here, with a less memorable mellody, but with a traditional aspect. Muirreann Vaughan is a 15 year old girl. She is born in Kanturk, in Cork County. Her song is called An Miongháire. She wrote it herself. Niamh cried watching Muireann’s performance. The best comments so far from the judges.

The fourth artist to perform was Aimee Banks, who is also 13 years old. She comes from Moycullen, a village in County Galway. Her song is called Réalta Na Mara (Star of the Sea). The song was composed and written by Aimee herself, with the help of some Eurovision veterans, Niall Mooney, Jonas Gladnikoff and Brendan McCarthy. The songs is an opera type song. Aimee has a very strong and mature voice. A stunning performance here.

The 5th artist to perform was David Kennedy, a 13 year old boy from Eyrecourt, a village in County Galway. His song is called Fuar (Cold). He wrote the song himself, with the help of Emma O’Rielly. Another strong performance and maybe the most modern song of the night.

Aisli was the last to perform. Her song is called Aisling (Dream). Aisli is 13 years old. The judges said that she is adorable and a new star.

The show started at 21.30 CET and was presented by Eoghan McDermott.The winner was decided by a professional jury formed by Niamh Kavanagh (Winner of Eurovision 1993 and also 2010 entrant), Brian Kennedy (Ireland 2006), and Stiofán Ó Fearail from Seo Linn. 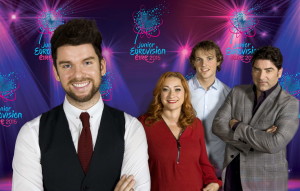 After the performance of the 6 candidates, the jury announced the two acts that went to the super final. The 2 acts that quallified were Aimee Banks and Zena Donnelly. The two of them fought in a music battle for the right to represent their country in the Junior Eurovision Song Contest 2015 in Sofia.

The two girls performed again their songs. An opera song Vs a classic Irish ballad. After and the second performances each judge voted for the final winner.

Brian voted for Zena and

Stiofán voted for Aimee so the winner with two votes was Aimee Banks.

The first Irish representative at Junior Eurovision Song Contest will be Aimee Banks with the song Réalta Na Mara.

About Aimee & the song

Thirteen-year-old Aimee hails from the small village of Moycullen, in County Galway, the heart of the Gaeltacht (the country’s Irish-speaking region). This young soprano has a lot of experience already; this past year, she won eight national titles at Ireland’s prestigious Classical Festival Feis Ceoil and was also awarded Overall Vocalist Award and Bursary 2015 for Midlands Feis Ceoil, as well as first place at the International Vocal Competition “American Protege”. Furthermore, less than a month after her performance in Sofia, she’ll fly to New York and perform on the famed stage at Carnegie Hall! She recently released her debut album, “My Classical Spirit”, with proceeds from the album’s sale going to the LauraLynn children’s hospice.

Aimee’s favorite contemporary musical act is Hometown, but her idol is the soprano Maria Callas. She realizes that not many people her age go into classical music the way that she has, but through hard work, determination, and the love and support of her family (especially the memory of her Nana, Aimee’s biggest fan, who recently passed away), she has been able to break boundaries and make her dream come true: To be singing on behalf of her country at Junior Eurovision.

When Aimee sings Réalta Na Mara, it will be the first time we’ve heard the Irish language performed at Junior Eurovision, and the first we’ve heard it in any Eurovision-related song since 1972. Aimee wrote the lyrics herself, and worked on the composition with Brendan McCarthy and veteran Eurovision songwriters Niall Mooney and Jonas Gladnikoff. The song is about the challenges that we all face in life, and how determination and strength will get us all through uncertain times.

Ireland announced on 23th of March 2015 that they will debut at the Junior Eurovision Song Contest 2015 to be held in Sofia, Bulgaria. The Irish language broadcaster, TG4, would be responsible for the selection of their first participant.

TG4 previously attempted to participate in the 2014 contest in Malta, but required funding from the Broadcasting Authority of Ireland (BAI), which was rejected.

Below you can watch the Irish entry for the Junior Eurovision Song Contest 2015 which will be held in Arena Armeec in Sofia on 21 November.

Stay tuned on EuroVisionary for more news regarding the Junior Eurovision Song Contest 2015.