As we have already reported Switzerland has one of the most complicated national selections in all of Europe. The three different regions of Switzerlands holds 3 separately preliminary rounds in order to select the 19 songs that will qualify to the next round of the competition, which are scheduled to be held on 6th of December in Zurich. 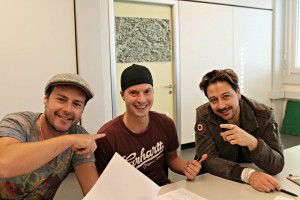 Radiotelevisione svizzera (RSI) has selected internally the 3 songs that will represent them in the expert check phase next month. A special jury formed by Pablo Meneguzzi (Switzerland 2008), Gabriel Broggini from Sinplus (Switzerland 2012) and Simone Tomassini who is a famous singer both in Switzerland and Italy chose the three hopefuls that will be performed on the 6th of December put forward by RSI. One of them will be the Swiss-Italian’s only spot in the final: Theo (Matteo Rossi ) – Because of you – Elias Bertini – Elephant – Nathalie (Nathalie Cadlini ) –  Share Love

Elias and Nathalie entered their songs also in the open selection of German-Swiss broadcaster SRF. The public voting period continues for SRF’s selection until 16th of November. In the next phase that starts on 6th of December in Zurich the three winners by RSI mentioned above, along with  the ten best performers from the internet platform, as well as six candidates put forward internally by RTS,  will present their songs live to an expert panel. The experts will judge their live performance skills, voice quality and stage presence. Of these 19 candidates, the team of experts will send three for SRF, two for RTS and one for RSI through to the final selection show.

In the live national show on the 13th of February 2016, the six qualifying performers will present their own song, plus a cover version of another song. This show will be broadcast live from the Bodensee Arena in Kreuzlingen. The television audience and an expert jury will then have a 50/50 say in who should represent Switzerland at the 2016 Eurovision Song Contest.

Which are the 3 songs and acts

Theo is a 21 years old singer and songwriter, born in Lugano. He mentions about his song:

The song is dedicated to all of you who like, me once in your life, have had a person away waiting just to be able to see: a loved one, a friend, a brother.. It doesn’t matter.

Elias is a London-based musician, but with a Swiss origin. He was the former frontman of the Swiss group Zero On In. In 2014 Elias with Zero On In made it until the Expert Check stage, now as a solo artist hopes for something better.

Nathalie is a London-based singer/actress. Nathalie played the role of a violinist in the music video for Brighi feat. Snoop Dogg’s 2012 song Play me Like a Violin.

Switzerland in the Eurovision Song Contest

All Swiss absences happened due to poor results in previous contests that relegated Switzerland from the contest. Switzerland has four official languages, French, German, Italian, and Romansh. For decades, the song requirements stated that the song had to be performed in a national language, which gave Switzerland more options as they could perform in any of the four languages. Out of their 55 appearances in the Contest, Switzerland has sent 52 songs, 24 of which were in French, 12 in German, nine in Italian, nine in English, and one in Romansh. Both of Switzerland’s winning songs have been sung in French.

The last time the Swiss representative in the contest was appointed by RSI was in 2014 when Sebalter was the winner of the Swiss-Italian region, and the eventually winner of the Swiss national final. Sebalter finished 13th overall with 64 points, marking the country’s best placing in the final since 2005.

This year at the 2015 Eurovision Song Contest in Vienna Mélanie René with her song Time to Shine won the Swiss national final ESC 2015 – Die Entscheidungsshow, organised by the Swiss German speaking broadcaster SRF. Mélanie René with 4 points ended 17th out of 17 in the 2nd semi-final and failed to qualify to the Grand Final.

Below you can watch Sebalter who was appointed by RSI at the 2014 Eurovision Song Contest, performing his song Hunter of Stars in the Eurovision Final.