Serebro are now a duo, but searching for yet another member to complete the line up. This will be the fifth change to the Serebro line up since their pop debut at the Eurovision Song Contest in 2007. But will it be the last?

How many of the Serebro girls do you remember from Eurovision 2007? Not many, probably. This is due to that only one of the original members still is a part of the group today. Another change is now coming.

The group was formed by music producer Maxim Fadeev with the hope that they would represent Russia at the Eurovision Song Contest in 2007. The band, usually always has consisted of two brunettes and a blonde starting with lead singer Elena Temnikova, Olga Seryabkina and Marina Lizokorna. 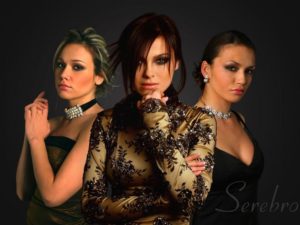 Marina left the group shortly after the group appeared at Eurovision and became an artist. She was swiftly replaced with another blonde Anastasia Karpova who stayed with the group until 2013. She is now a persuing solo career. Another blonde was needed and came in the form of Dasha Shashina.

Then it was time for Serebro to lose a brunette. Lead singer Elena Temnikova who was the first member to be signed up to the group at it’s conception left in 2014. Leaving a few months earlier than planned due to pregnancy the group needed an urgent replacement to meet their planned commitments. Karpova temporarily came back and for the first time in the bands history there were two blondes and one brunette. Polina Favorskaya joined the group later that year.

The curse of the blonde continued as Dasha Shashina who had been in the group for 3 years left the group citing health issues. There was an urgent open casting and Russian model Katya Kischuk was the next member to join the band. But it did not end there, Polina Favorskaya has left the group after just 3 years which has left producer Maxim Fadeev in a predicament. Whether to find yet another replacement for Polina to complete the famous trio or to continue as a duo with the oldest member Olga Seryabkina and newest member Katya Kischuk.

When everyone started talking seriously about the duo, I hesitated. Now we are all in a kind of confusion, although they already resigned themselves to the departure of Polly. I heard all and want to say thank you for the reaction and sincere experiences. It really was important, even more than you can imagine. The history of SEREBRO began with a trio. And history should continue, even if it is difficult for us to accept it”.

Included in his statement, Fadeev announced that the casting for the new member will be completed immediately via Instagram. Anyone who wants to join the band must submit a 1 minute long video to instagram with the hashtag #SEREBROBQCASTING stating their name, age, height and performing any song of their choosing. The video casting will be open until the end of the week, closing on Sunday 8th October.

Let’s take a moment to enjoy the original line up of Serebro and their performance of their Eurovision entry Song #1. The girls came in 3rd place in 2007 behind Verka Serduchka from Ukraine and the champion Serbian Maria Šerifović.