Tonight, Sanremo 2016 continued. The other Big ten performed their songs and were selected by televotes/press jury, the same as yesterday. We also found out the provisional bottom-4 who faces elimination on Friday’s semifinal. Finally, we will have the first disqualifications amongst the Newcomers, who compete in the direct duels.

Sanremo 2016 had a very successful start last night with big viewing figures for the first night and with more than 550.000 tweets sent for it (#Sanremo2016). In tonight’s second show of Sanremo 2016 ten more Campioni artists presented their songs at the stage of Teatro Ariston. We also saw the first four newcomers contestants. The second night of the Sanremo Music Festival hosted Italian superstars Eros Ramazzotti, who sang a medley of his greatest hits as well as Ezio Bosso who is a composer and pianist. Ellie Goulding was the foreign superstar for today as well as special guest stars, actress Nicole Kidman and comedian Nino Frassica.

Click on the names of the artists and the songs to watch the performances from Teatro Ariston.

Dolcenera wore a long white and black dress. She’s sat at the piano. Dolcenera already won Sanremo in 2003. She’s got the rainbow stripes with her. Fantastic vocals, blues song with big backing vocals. A typical Italian song with a familiar sound.

Another song for refugees here. With rap sounds and an energetic performance including piano and an acoustic guitar on stage. Clementino was decent at singing his song. Not very original but kinda nice anyway.

Patty celebrated her 50th anniversary in music. She was invited as a guest but she decided to be in the competition instead. A fantastic song that could do very well in Stockholm. Great vocals and a very confident performance. One of the favourites for sure.

Valerio Scanu also had the rainbow stripes on. His song is a ballad and was very melodic The most Italian sounding song of all for sure. Nice vocals but very typical.

Michielin wore the rainbow stripes in her bracelet. A strange dress for her. Her song is a very catchy pop ballad. Her vocals are good but too ordinary like the previous one.

The most pop song we get in Sanremo, it reminds me of last year’s song by NEK. Unfortunately for Alessio, this isn’t a NEK song. Bad vocals and a flat song.

A funny song here. They wear pink suits. Not my cup of tea and a very bad choice for Italy in Eurovision after all the masterpieces they sent to the contest so far.

A midtempo song. Nothing much else to say. Nothing to dislike but nothing to like also.

One of the hot favourites to win. A dissapointing performance I think. Annalisa wore a long white dress and red hair. The song was half spoken words with a banging piano and it took ages to get anywhere.

The last Campioni contestan is a duet. A midtempo pop song with descend vocals but a forgetable melody.

Carlo Conti, who also serves as the artistic director for the competition is also the host of Sanremo’s 2nd night, along with Virginia Raffaele, Mădălina Diana Ghenea and Gabriel Garko.

The night started with the first Newcomers duel. Two females competed for the ticket to the section’s final. Chiara Vs Cecile and immediately followed by the boys, Irama Vs Ermal.

After a break advert it’s time for the Campioni artists. The first three big artists sang their songs followed by the Italian superstar Eros Ramazzotti with his Sanremo medley as well as some of his greatest hits. After Eros we returned to the contestants.

After hearing a fifth contestant, it’s time for Ezio Bosso a famous paraplegic pianist to amaze us with his skills.

After an advert break, Ellie Goulding enters the Sanremo stage with her song Love Me Like You Do followed by her new single Army.

We continue with contestant number eight, followed by Nicole Kidman who appeared on stage looking extremely gorgeous as always. Carlo interviewed her for a few minutes and it was then time for another advert break.

After the 10th artist performs, we are treated to a a small recap of the songs and another commercial break.

Finally, comedian Nino Frassica is the last guest to enter Teatro Ariston’s stage. A last recap of the songs followed by a break advert takes us to the announcement of the results.

A mixed of televotes and votes by the journalists in the press center (composed of accredited journalists that will follow the competition from the Roof hall at the Teatro Ariston) voted for the first two nights, but none of the competing acts will be eliminated over those two nights. The previsional bottom 4 that faces an elimination on Friday is: 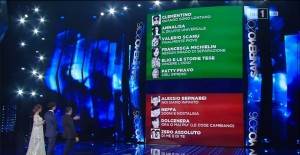 Newcomers Duels:
The newcomers will compete into duels. Today, we saw the first two duels of the Nuove Proposte section. The four participants are paired in two groups for the duels. The winner of each pair will qualify for the Nuove Proposte final in the fourth night of Sanremo.
Chiara Dello Iocovo – Introverso Vs Cecile – N.e.g.r.a
Irama – Cosa resterá Vs Ermal Meta – Odio le nuvole
The two winners were:

Below you can watch a compilation of the last 5 years of Italy in the Eurovision Song Contest. We did our best to find our greatest footage, and maybe you’ll see something you haven’t seen before.