Unlike the BBC, France is sticking with an internal selection and today broadcaster France 2 published the rules for everyone interested to submit a song for the French selection for the Eurovision Song Contest 2016.

All singers and songwriters wishing to represent France in Eurovision 2016 can send their songs in to France 2 no later than the 31st of October. The performer can be of any nationality, but they have to be able to speak and sing in French. The entry has to be at least 80% in French, and the other 20% can be in any other language.

A special jury from France 2 will review all of the submitted songs, and internally select the best one, which will wave the French flag in Stockholm, Sweden.

All promotion of the selected artist and the song will be done by the artist, their management and record label. However France 2 will have the right to decide on the artistic direction of the song and the song promotion, as well as the final decision for the stage presentation in the Eurovision Final in Stockholm.

The most interesting thing is that France 2 has an age limitation as they only allow people to enter the procedure if they are between 16 and 50 years old. The 16 matches the rules of the Eurovision Song Contest however the EBU has no maximum age set.

Finally, France 2 promises that they will promote the winning song in its television programs in the run up to Eurovision, as they did last year with Lisa Angell.

New Head Of Delegation For France: 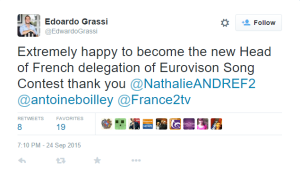 France in the Eurovision Song Contest:

France has participated in the Eurovision Song Contest 58 times since its debut at the very first contest in 1956. France is one of only seven countries to be present at the first contest, and has only been absent from two contests in its history, missing the 1974 and 1982 contests Only Germany has one more participation than France. France has won the contest five times (1958, 1960, 1962, 1969, 1977), and along with Germany, Italy, Spain and the United Kingdom is one of the Big 5 who are automatically allowed to participate in the final because they are the five biggest financial contributors to the European Broadcasting Union (EBU).

Last year the French entry was selected through an internal selection, organised by the French broadcaster France Télévisions. The nation was represented by the song N’oubliez paz performed by Lisa Angell. Lisa premiered the song in November 2014 when she performed during a 1st World War centenary concert held at La Madeleine, Paris. With only 4 points France finished 25th in the Grand Final.