When The Shadows in 1975 sang out  "Let Me Be The One” at the Eurovision Song Contest, Europe almost agreed to let them be that.

Primarily thought upon as a loosely connected backing band behind Cliff Richard, the Drifters was formed in 1958. Shortly after, the name was changed to The Shadows, so as not to get the young band into problems with already existing US band The Drifters.

The first out of a total of 34 hit songs was “Apache” in 1960. It went no. 1 in the UK. In the USA, it was overtaken by Danish guritarist Jørgen Ingman, Eurovision Song Contest winner 1963, who had released the same song just before The Shadows, and therefore got the no. 1 on the US billboard.

For a period of 10 years until the breakup in 1968, The Shadows played backup to Cliff Richard when needed, receiving 33 hit songs (mostly in Europe), while remaining more or less unknown in the USA. For the record, not all the 67 songs went no 1, but some did. Others did well and went high in different charts in Europe.

The Shadows line up has changed over the years, but the original “Move It” line up was: on lead guritar Hank Marvin (born: Brian Robson Rank), on rhythm was Bruce Welsh (born: Bruce Cripps), Ian Samwell on bass and Terry Smart on drums.

Indeed, the swing door was on heavy duty in those early Shadows years, but the band, whether backing Cliff or solo, maintained a very high quality in their recording works. For Hank Marvin, it also meant that he became an idol for later known guritarists like Jeff Beck and Eric Clapton. 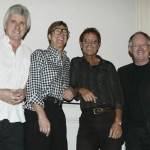 In the early 1970’s, Hank Marvin and Bruce Welsh formed a trio with Australian singer John Farrar. That formation performed until the 1973 rebirth of The Shadows, with Marvin, Welsh and Farrar as regular members, supported by session bass players. John Rostill, their old bass player, died the same year.

BBC boss Bill Cotton decided in 1975 to let The Shadows represent the UK in the Eurovision Song Contest in Stockholm. After a 6 week long contest, where one song was performed by The Shadows each week, “Let Me Be The One” finally won the ticket for Sweden, where it finished second behind Dutch entry "Ding-A-Dong"..

Recording and peforming contemporary and classic rock and pop songs, The Shadows did well in the 80’s. However, with Marvin now living in Australia (he moved down under in 1986), and the rest of the band in the UK still using session players, it was clear that The Shadows was coming to the end of the line, and in 1990, they finally broke up.

Many years later, in 2004, The Shadows came together for a long farewell tour lasting more than a year. The line up was Hank Marvin, Bruce Welsh and Brian Bennett. On bass was Mark Griffiths and Cliff Hall was on keyboard.

Yes The Shadows was the one, and Europe almost agreed.