Do England, Scotland, Wales and Northern Ireland all get their fair share? Unlike in sporting events such as Football and Rugby, the countries are all represented as the United Kingdom by the BBC at Eurovision. So, what are the statistics for the UK constituent countries when it comes to being represented at the contest?

The United Kingdom is one of the most populous countries in Europe, with a population of over 65 million. It is made up of four constituent countries: England, Scotland, Wales and Northern Ireland. These countries have contributed to the success of the UK’s ever-expanding music business and has made it the second largest exporter of music (per capita) in the world.

Consequently, it is no surprise that the United Kingdom has had a very successful relationship with the Eurovision Song Contest, in which they have finished in the Top 3 on no less than twenty three occasions.

The Island Nation was always a force to be reckoned with when it came to sending big artists and/or chart worthy music. Now, in recent years, we may wonder if this is the same country, as they have not been able to emulate their success from the 60’s to the late 90’s. But does it matter if you were born in a specific UK country? Would that help you achieve a better result on the Eurovision stage, and does the United Kingdom favour one nationality over the others?

To make this an accurate report, population is set at 60.35 million (the average of 1971 and 2011 populations according to census data).

In a perfect world, we would expect that each country’s population percentage would correspond with it representation in Eurovision. But further analysis of this suggests that it is not as straightforward as that, and not all participants were even born or raised in the UK with singers from Australia, USA and Germany representing the country over the years. 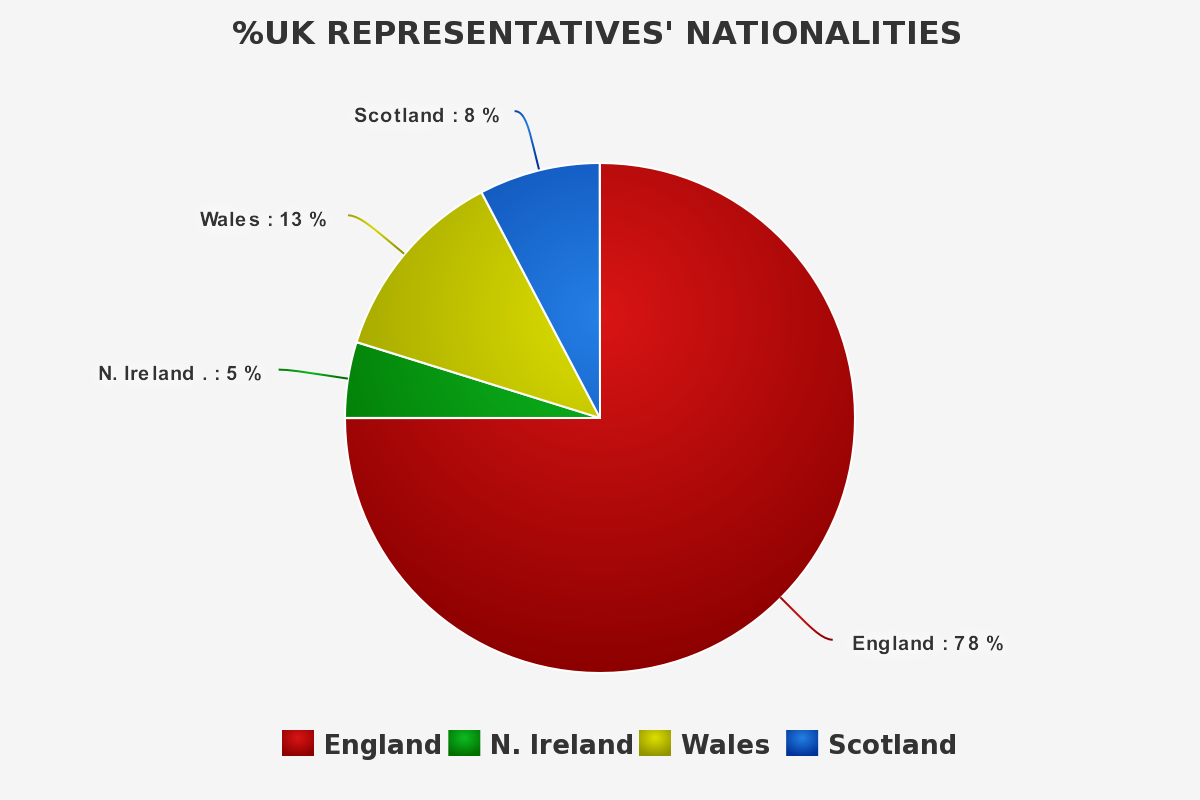 To those mathematicians out there, it may seem as if the chart doesn’t add up to 100%, and you would be right. This is because many of the acts that have represented the United Kingdom have been duets or groups, consisting of more than one Nationality, for example New Seekers in 1972 and Joe & Jake in 2016. Therefore we have had to accommodate for that.

There are many noteworthy conclusions we can make from this chart. England as a country is under represented at Eurovision when it comes to singers. While both Wales and Northern Ireland have sent more than their fair share of performers to the contest. Scotland is slightly under-represented in the contest, but in comparison to that of England, they are more evenly represented.

What is interesting is that most of UK’s victories come from English and Scottish singers, the two countries under represented. No Northern Irish representative has ever reached the top three, yet, both Ronnie Carroll and Clodagh Rogers finished fourth on all three occasions.

Does United Kingdom favour a specific country? Yes! Wales has been better represented in the contest in comparison to the other three countries. Is this a surprise for many living in the UK? Not really. For many years, Welsh people have been known for their amazing singing ability, with fantastic local talent, such as Shirley Bassey, Tom Jones cementing this belief. Even 2013 representative, Bonnie Tyler, became an international sensation in the early 1980s with her power ballad Total Eclipse of the Heart.

Although it isn’t a sure-fire guarantee that a Welsh performer will provide United Kingdom with a good result, and Wales can only lay claim to one victory in 1976 (Nicky Stevens providing vocals as part of Brotherhood of May), it does seem that UK like to provide more opportunity for this principality to show their musical credentials. How apt it is then, that this year’s contest saw Cardiff, the Welsh capital, born Lucie Jones perform her emotive ballad, Never Give Up On You in Kyiv, giving United Kingdom its best placing in 6 years.

Is their next winner going to be a Welsh singer? Who knows, but the odds are in their favour.