We’ll never know if Iceland would have won the 2020 Eurovision Song Contest too, but they would have been a strong contender to do so. With the combination of votes from Fans as well as a professional jury tonight, they can now call themselves winner of Eurostream 2020.

After two exciting semi-finals held Tuesday and Thursday this week, we had now made it to the final of Eurostream 2020. This came in place after the cancellation of the 2020 Eurovision Song Contest.

The project that is backed by more than 20 Eurovision media provide fans the opportunity to vote for their favourite acts. This was then combined with the ones from the juries – and as a result, we have now an alternative winner.

Before tonight’s winner, the top favourites from bookmakers and fans were the acts from Iceland, Lithuania and Bulgaria. One thing is however, what they think – an entirely different thing is how people actually vote – and not least, how a professional jury vote. From mid day today, fans were able to vote online for their favourites act. Everyone had to cast their votes for three to five songs. Voting closed after the clips from all 26 acts in the final had been shown. The professional jury voted beforehand.

By the way, can anyone imagine a Cypriot jury not giving any points to Greece? Well, that happened tonight.

Tonight’s final was delayed due to technical difficulties. When it started, it however didn’t take more than a few minutes, before it broke down again. Eventually, it got up and running after close to 25 minutes delay.

On YouTube, the stream cut again later into the show due to “policy violations. On Facebook, it continued. After a few minutes it was back up again on YouTube. Finally, we had a few hiccups with wrong songs being performed here and there. Also on Facebook the stream was re-started several times.

Just as we thought, all issues had been solved, the stream was cut twice during the re-cap. Once again, it was “suspended due to policy violations”. Spain was shown without sound this time, so maybe the blocking of the stream kept happening from a Spanish copyright holder? This is just a guess, we are not informed, and it could be a coincidence.

During the voting, we had issues again with some jury votes announced, but not added to the scoreboard. The core team behind then instead put on clips from their rehearsal before they simply cut it again and put a technical issue message up.

Despite all these many technical issues, it looked like the viewers kept finding their way back to the stream.

It hadn’t been possible to find jury members in Israel, Latvia and Russia. The jury result for these countries was aggregated based on neighbouring countries. In the other countries however, we find many former Eurovision Song Contest participants as well as national finalists. They joined the likes of spokespersons, composers, radio hosts, commentators etc. We list here the former Eurovision participants and national finalists who are to be found as jury members for the Eurostream 2020 project. 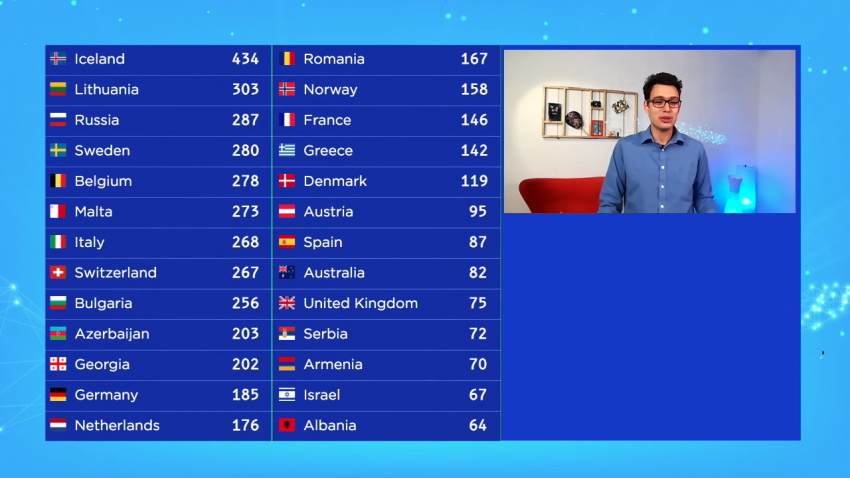