Next year Iceland celebrates 30 years in the Eurovision Song Contest and broadcaster RUV confirmed yesterday that they will once again use Söngvakeppnin as the national final to select their participant for Eurovision 2016. Submissions for the competition are open now and will close on 2nd of November.

The 2016 selection will mark 30 years since Iceland first participated in the Eurovision Song Contest. The country will use the method of Söngvakeppnin to choose their next representative in the 61st Eurovision Song Contest in Stockholm. As usual the winner of Söngvakeppnin will wave the Icelandic flag in Sweden, trying to quallify to the Grand Final after last year’s failure where Maria Olafs’s journey stopped in the semi-final. Besides winning the right to represent Iceland in Eurovision 2016, the national winner will also win 1 million Krona (about 7.000 €).

The dates of the competition have not yet been announced,however usually the semi finals and final will be held in January and February. The selection are now open for submissions and will close on 2nd of November. 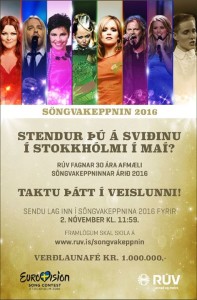 Iceland in the Eurovision Song Contest

RUV usually uses Söngvakeppnin to select their participant for Eurovision, however an internal selection has been used a few times.

Last year Maria Olafs with her song Unbroken was the winner of Söngvakeppnin 2015 and represented the nation in Vienna. With 14 points Iceland was 15th among 17 entries in the 2nd semi-final and due to that result unable to continue to the final.

Below you can watch Maria Olafs performing her song Unbroken at last year’s Eurovision Song Contest: