It was a break from the Campioni competition tonight as 16 of them performed covers of famous Italian or foreign songs. The best cover performance, as chosen by an equal combination of votes from a press jury and a televote, was Ermal Meta and he was awarded a special prize.

The third night of Sanremo featured the 16 Campioni artists,all of which performed cover versions of either Italian songs or international hits of their choice. The competing acts also had the option to perform the cover with a guest artist they invited for tonight’s show.

The covers the 16 Campioni sang were:

Tonight, the remaining four of the Newcomers category also performed their songs. Two acts qualified to the final of the competition. The six big artists that didn’t manage to qualify to tomorrow’s semifinal of Sanremo had a last chance to remain in the competition.They sang again their entries and the bottom two were eliminated while the other four artists were readmitted to compete in the semifinal.

In addition to the performances of the competing entries, guest performers were Mika who performed with the children’s choir Piccolo coro dell’Antoniano, known from the children’s singing competition Zecchino D’oro. Actors Marco Giallini and Alessandro Gassman.

The winner of the cover night, after the voting of the viewers and the press jury was:

The two artists that were eliminated from the festival are:

Tonight’s two qualifiers for the Nuove Proposte Final were: 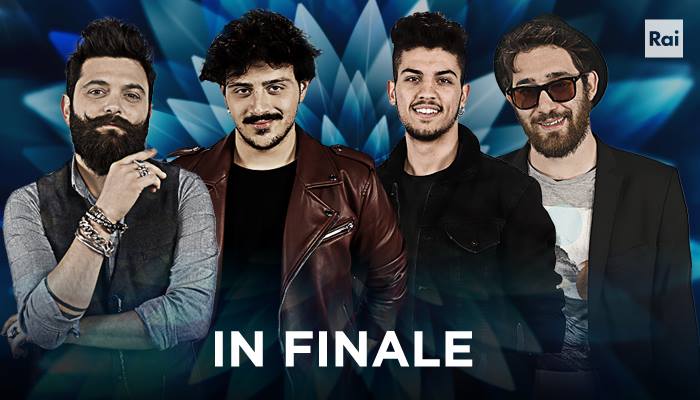 The Festival della canzone italiana di Sanremo is the most popular Italian music festival, held annually in the city of Sanremo. Usually referred to as Festival di Sanremo, or outside Italy as Sanremo Music Festival. It was the inspiration for the Eurovision Song Contest.

The first edition of the Sanremo Music Festival, held between 29 and 31 January 1951, was broadcast by RAI’s radio station Rete Rossa and its only three participants were Nilla Pizzi, Achille Togliani and Duo Fasano. Starting from 1955 all the editions of the Festival have been broadcast live by the Italian TV station Rai 1.

From 1951 to 1976, the Festival took place in the Sanremo Casino, but starting from 1977, all the following editions were held in the Teatro Ariston, except 1990’s one, held at the Nuovo Mercato dei Fiori.

The festival has been used as the way of choosing the Italian entry to the Eurovision Song Contest from 1956 to 1966, in 1972, 1997, 2011 to 2016. It has also launched the careers of many very famous Italian singers, including Andrea Bocelli,  Paola e Chiara, Giorgia, Laura Pausini, Eros Ramazzotti, and Gigliola Cinquetti.