This evening, the famous Italian music festival Sanremo kicked off. With some of the most popular Italian artists competing for this year’s trophy, worldwide guests and complex and endless voting, the festival started with the first eleven ‘big’ artists presenting their songs to the public.

Eleven Campioni songs were presented tonight and the bottom three entries will enter an extra competition round in the third night and face additional voting to determine if they continue in the festival or not. The voting was 50-50 by televote and by the journalists in the press center (composed of accredited journalists that will follow the competition from the Roof Hall at the Teatro Ariston). The same voting system will also be used tomorrow. Carlo Conti presented the show and also serves as the artistic director for the competition. Conti presented the show together with his biggest TV opponent Maria De Filippi. During this first night, Clean Bandit and Ricky Martin, along with Italian artist Tiziano Ferro performed as the interval acts.

Carlo Conti revealed some important information about this year’s Italian representative at the Eurovision Song Contest.  First of all, as we know already, the winner has the right to represent Italy in Kyiv. If the winner declines the offer (just like Stadio last year), then RAI will ask the runner-up and then the third one and so on until someone says yes. The Eurovision Song Contest will remain on RAI1, the main national broadcaster.

The experienced artist who managed to come second in the first Italian edition of talent show X Factor opened the event with a mid-tempo pop ballad. The entry remained almost constant in terms of tempo and rhythm, while the stage was dipped into blue light, which supported the character of the track.

Fabrizio’s ballad started slowly, accompanied by little lighting. Within three minutes, the song grew and grew and finally reached a spectacular climax, before then ending slowly again. The audience enjoyed the performance and reacted with great applause.

Elodie’s song started powerfully and was carried by the artist’s very modern and strong vocals. Although the track started powerfully, it further built and grew and ended in high tempo. The song was co-written by Italy’s 2014 representative Emma Marrone.

Ludovica’s song can be classified as a mid-tempo pop tempo track that brought a mix of traditional and modern on tonight’s Sanremo stage. She has gained popularity even outside of Italy for her role as Francesca in the Argentine Disney Channel series Violetta.

The song started quietly, almost spoken to, then musically climbed and ended after a powerful climax. The audience reacted with the biggest applause so far, confirming the fact that Fiorella competes as one of the main favourites to win the competition. The 62-year old Italian artist is a well-known name in Italy’s music industry with a career that has lasted already for more than 30 years.

After Fiorella’s traditional song, Alessio Bernabei joined the competition with a modern, up-tempo pop entry. It is already his third participation in a row in the Sanremo Music Festival.

With multiple participation at the Sanremo Festival – as well as in the Eurovision Song Contest – Al Bano is one of the most popular artists of this year’s competition. This year’s song has a very classical, Italian, but very elegant, style to it and seemed to be much appreciated by the audience at the Festival.

Samuel is a singer-songwriter in the Italian rock band Subsonica. The second upbeat song of the night. Groovy and nicely retro. Maybe not very Eurovision-friendly and a bit repetitive unfortunately. His vocals are poor, too.

Ron is an Italian singer-songwriter and musician. He has already won the Sanremo festival with Vorrei Incontrarti Fra Cent’anni, sung in a duet with Tosca. Ron wears a fashionable velvet jacket and sings his tender ballad with gusto. Just exactly what we’d expect from him.

Clementino is an Italian rapper and beatbox artist who performs in both Italian and Neapolitan. Clementino also participated last year in Sanremo. His song opens with the chorus, which is kinda nice really and with a beautiful arrangement. The overall atmosphere of the song is really nice. It could do well in Eurovision, too.

Ermal has already taken part in the newcomers category of the festival. His song grabs you from the first note and keeps you listening, even if you don’t understand the lyrics of this important theme. It’s about violence. Catchy and modern.

The show was introduced by a short video which gave a review on past Sanremo highlights, presenting important milestones of the competition without presenting the winning songs of past Sanremo editions. Then, the participants of this year’s contest presented themselves and talked about their aims, their music and Sanremo within a short video.

After a short light spectacle showing the modern elements of this year’s stage, Carlo Conti welcomed the audience, briefly explained the voting system of the night and introduced his co-host Maria De Filippi before going straight over to the first songs of the night.

Between the competing entries various guests joined the two hosts on stage. After the first two songs, Raoul Bova joined the show, then being followed by a group of members of the police, paramedics, the fire department and the Italian military, showing their extraordinary contribution to society.

After six performed Sanremo tracks, Tiziano Ferro presented his song Potremmo Ritornare as an interval act and then joined the hosts in a short conversation concerning his upcoming music until he presented his latest single Il Conforto as a duet together with Carmen Consoli.

Carlo Conti after the 8th contestant takes the right spot to thank for the lights, the stage and all the rest. They all look marvelous. Before the 9th artist takes the stage in Teatro Ariston, Paola Cortellesi and Antonio Albanese, aka Nicola & Valeria, sing a song that was eliminated from the festival. The truth is that this song is various love songs from the festival’s history, which certainly make a weird love story when put together this way.

Before the last two songs, two students talked against bullying. Ricky Martin appears on stage before the last song of the night, singing a medley of his hits. After some ex hostess of the festival, we have the last guest for today, the UK band Clean Bandit.

As we have already said, on the first two nights, the bottom three of each night will enter an extra competition round in the third night and face additional voting to determine if they continue in the festival or not. Tonight’s and tomorrow’s results are to be added to Friday’s results in order to have the Top 16 that qualify to the Final. 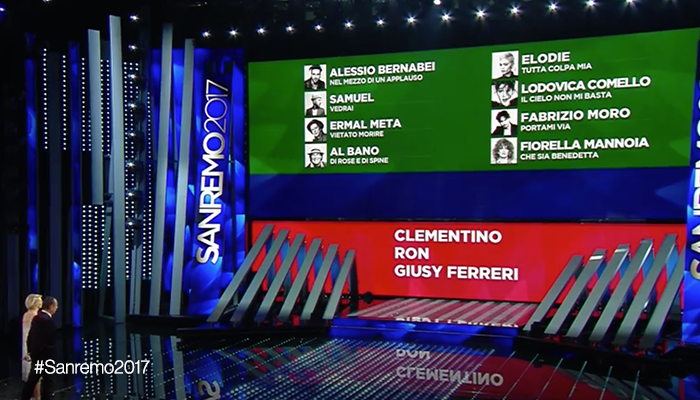 The three entries that will enter the repechage round on Thursday and will face the elimination are:

Italy has participated in the Eurovision Song Contest 42 times since making its debut at the first contest in 1956. It was one of only seven countries that competed in the very first contest. Italy competed frequently in the contest until 1997. After a fourteen-year absence, the country returned to the Eurovision Song Contest 2011, with a respectable second place achieved by Raphael Gualazzi and Madness of Love. Italy has won the contest twice (1964, 1990).

Along with Germany, France, Spain and the United Kingdom, Italy is one of the Big 5 who are automatically allowed to participate in the grand final because they are the five biggest financial contributors to the European Broadcasting Union (EBU).

Remember to check into EuroVisionary for more news about Sanremo 2017. Until then, enjoy last year’s Italian entrant in the Eurovision Song Contest, Francesca Michielin: