Italy decided through the most complex voting procedure across Europe the winner of the Sanremo Music Festival 2016 who decided not to represent the nation in Stockholm in May, at the Grand Final of the Eurovision Song Contest 2016. Night 5 was held tonight, with the Grand Final of Sanremo 2016. The winner of most popular music festival in the country were Stadio with the song Un giorno mi dirai

With the Campione dei Campioni as Italians say the 66th Sanremo Music Festival arrived to an end tonight. The big winner who will try to bring the victory for Italy in Stockholm were Stadio, rounding up the top 3 tonight were also Francesca Michielin and Deborah Iurato & Giovanni Caccamo.

As we have already reported you how the performance of the artists were in the 4 previous nights, we will focus on the Eurovision prospect of the songs.

The Italian fans’ favorite for Eurovision. A new Gigliola Cinquetti ’64 in the making? She sings very well tonight and for Eurovision? Maybe. Why not. It’s a catchy pop ballad.

This is no Nek last year, its Alessio. Alessio has one of the weakest vocals among the 16 artists. But he has a huge fanbase that helps him quallified yesterday. Good for Eurovision? No way.

A rap act, and maybe not of the good ones. Vocals aren’t so good escpecially during the chorus. A song that could not do well in Stockholm and i think neither tonight.

The best melody of the night. It flows in a lovely way and she does a good job. I’d love her to make the top 3 and even win. The idea of her in Eurovision is at the same time exciting, amusing and scary. We’ll see…

A strong ballad that reminds us of L’essenziale. It’s a good song even for Eurovision. Lorenzo looks good on camera and fans love him. Will he manage to quallify to top 3? Maybe..

This one needs further listens. A good song but not so intimate. Definitely not for Eurovision. Maybe the most Italian song of the night.

This could work better as an interval act in a contest held in Rome. It’s funny but not for Eurovision, joke songs are songs that the contest doesn’t need I believe. Many Italians like it, if the juries support them it could quallify to the top 3.

One of the favourite to win. The problem with Arisa’s song is that her 2014 entry was much better. However, its a nice song that might bring Arisa to the top 3.

Stadio becomes stronger every day. They won the cover prize and with their energetic performance they could even win tonight’s show. They could go to Eurovision, it would be nice to see Italy with something different.

Vocally good but thinking of Eurovision I suppose this wouldn’t just work at all. Dramatic. A lot of words and nothing to remember after.

He’s got personality and the rapper next door image works. Important text, catchy song, much better day by day. He has said he’d love to do Eurovision and bring some Italian funk rap there. I don’t like rap but I think he could do well.

The song is a nice powerful ballad that grows stronger and stronger with a slight jazzy touch. Maybe not be the most modern track here, but it’s classy and quite enjoyable. A typical Italian song even in Eurovision, could easily make a top10 place in May.

He seems to be really enjoying his performance. A song that works and is catchy. He has said he’d love to do Eurovision again after 1993 but I doubt this song could do well in the contest. But one of his better entries ever.

Excellent vocals, beautiful melody, amazing camera work. Maybe the safest choice for Eurovision. A song that many loves and is a sure top 3 I think.

The song gets better with further listens. Many fans want him for Eurovision. His vocals are not so good but he has a huge fans base so it could be a surprise.

Irene quallified to the final through the repachage round of voting as she was in bottom 5 in semifinal. However Blu is a dramatic ballad about the refugees. I love this song, very sweet voice. I think the only problem is that is too dramatic. I wouldn’t mind to see that in Eurovision.

The fifth and last night of Sanremo Music Festival 2016 concluded the competition by determining the winner of the Big Artists section. Sixteen entries competed tonight. The fifteen entries that qualified from the fourth evening and the winner of the repechage round. The overall winner of the Campioni section was determined over two rounds of voting. In the first round, the top three entries from the sixteen competing entries advanced to the second round of voting. In the second round, the winner was decided. All results was determined through the combination of public televoting (40%), the votes of the expert jury (30%) and the votes of the demoscopic poll (30%).

Carlo Conti announced that the winner, which simultaneously was the 16th contestant in the Campioni Final was: Irene Fornaciari.

The three artists that entered top3, the second round of the voting were:

The rest of the results were as follows: 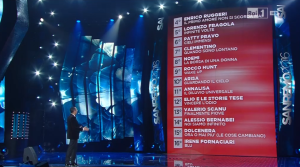 The special prizes were as follows:

RAI through twitter announced just after the final that Stadio won’t use their right to represent the country at the 2016 Eurovision Song Contest, so we have to wait and see if Francesca Michielin who ranked second will represent the nation in Stckholm.

RAI announced that according to the rules of Sanremo Music Festival they will soon announce their representative for Stockholm.

#Sanremo2016 Rai, according to the Festival di Sanremo rules,will soon announce the name of the Italian entry at the Eurovision Song Contest