For the first time ever, Portugal chose a song in English for the Eurovision Song Contest. That is causing some controversy in the local media, and once again, the question is; did Portugal make the right choice with the winner not being anyone’s favourite?

Saturday evening, another edition of the Festival da Canção final took place and the experienced band The Black Mamba was crowned the winner. With 10 points from the jury and 10 points from the audience, the victory was given to the band formed in 2010. Love Is On My Side is the name of the soul song that will represent Portugal on the Eurovision Song Contest in Rotterdam, in 2021.

The band ended in a tie with Carolina Deslandes during the contest broadcast on Saturday night by RTP with 20 points, but the public vote prevailed, which gave the group of vocalist Pedro Tatanka the triumph. On the public side, the 12 points belonged to NEEV, who only received five points from the jury (final: 17 points – not enough to win).

A result that divided opinions

Judging by the 12 points attributed by the televote to the singer NEEV and after the dozens of reaction videos published by Eurovision fans on the YouTube platform, we can predict that the public’s desire (both Portuguese and European) was for this to be the winning song. Before the final, NEEV was getting the best response from the audience, as well as the song Saudade by Karetus and Romeu Bairos or even the soft music Por Um Triz by Carolina Deslandes. 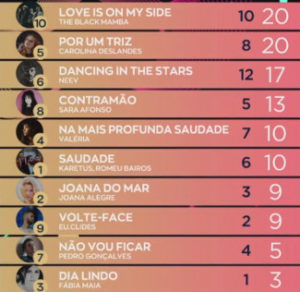 Before the final, apparently, the voice of the experience and the established path of the winner The Black Mamba were not enough for this option to be the absolute preference of the spectators of the Festival da Canção. We can conclude this fact, judging by some polls published by the Portuguese media, such as this one of the magazine NIT: New In Town, where NEEV was almost declared the winner in advance.

Portugal is known for presenting finals of the Festival da Canção in which the preference of the Portuguese people (almost) always differs from the opinion of the judges and that is exactly what happened on a night when RTP registered a record of telephone votes: more than 70.000.

In the opinion of the national jury, which is worth 50%, both the music of the well-known Carolina Deslandes and the winning song Love Is On My Side were superior to the public’s favourite Dancing In The Stars by NEEV. The question that remains is: Should we have heard the “voice” of the people this time? Or will the solid background of The Black Mamba and the strong voice of vocalist Pedro Tatanka be enough? We have to wait and see.

The SAPO Mag platform also brings this up: “according to data from the streaming services, three competitors took the lead: Carolina Deslandes, Karetus & Romeu Bairos and NEEV”, but the combination of votes resulted in a winner: The Black Mamba.

Contradicting history: Portugal and the habit of songs sung in Portuguese

Through social media, many were indignant that the chosen song is sung entirely in English due to the long history of choices in the country’s official language. According to a fan on the social network Twitter, this is the “first time we took a song in English to Eurovision. A part of me died today, sorry“. Another fan of the festival indicated that “(…) the Portuguese being represented by a song in English does not suit me well”.

However, there is no impediment to compositions to be made in any language other than the official, as we can see all over Europe with so many countries choosing melodies with English lyrics. Also, in the regulation of the event organised by RTP it can be read that “it is not mandatory that the songs are interpreted in Portuguese”.

Blitz Magazine also focus on the English aspect by concluding that “it is the first time that the winning song of the Festival da Canção is not sung in Portuguese”, but recalls that there were already other songs taken by Portugal with some English verses.

Below you can listen to this year’s Portuguese Eurovision entry by The Black Mamba: