They have been out of the game since Can Bonomo’s highly appreciated entry “Love Me Back” from 2012. He left the Turkish fans proud with a respectable 7th place. Unfortunately Turkey has not participated since then, but the fans are still there.

Out of the Eurovision Song Contest doesn’t mean that there are no Turkish Eurovision fans anymore, nor that they are sleeping. In Turkey, there are several fan clubs, with OGAE Turkey being most active. Eurovision has been highly popular among Turkish people even before it’s debut in 1975. The contest used to be like a national holiday until the 90’s. You would hardly see any people in the streets on the Grand Final night.

It was like a love and hate relationship although Turkey did not have much of a success in the 70’s and 80’s. In the 90’s, people started to lose the excitement, and Eurovision began to lose its popularity among the general Turkish population. It came as a big surprise when Sebnem Paker gained the respectable 3rd place with Dinle in 1997. But it wasn’t enough to get back to its glory days – until 2003. Sertab wrote history and brought the contest to Turkey. Sertab and her team were welcomed like heroes.

Although the Eurovision Song Contest is not broadcast today, most Turkish people still know about it, and many miss the days their country used to participate. However there is also a big number of people who think Eurovision voting is all political, where neighbors always vote for each other. For that part, participation or not, is not an issue they worry about. In general, people have little hope in participating again, but still they can’t keep themselves from checking up on the latest entries, especially the winner of the current year. If Turkish broadcaster TRT would only broadcast the shows, we’ll probably see a population still tuning in, no matter if their country took part or not.

OGAE Turkey currently has 190 active members. Back in 2012 when Turkey last participated, they had 120 members. So Eurovision is still fresh, and even growing in Turkey despite not participating.

The fanclub is frequently in touch with TRT, they keep repeating their request to go back to the good old days where Turkey used to take stage in the most popular TV show of Europe. Due to the government’s policies, the Turkish broadcaster unfortunately keeps turning down the request of fans – with explanations like complaints about the Big 5 countries’ direct qualification, neighbour voting, political voting etc. 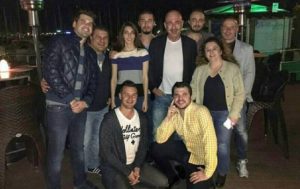 Through their Facebook pages, Instagram account, YouTube channel, and a chatroom in which club members socialize and discuss Eurovision, the fans try to keep the excitement fresh, sharing news, their comments and their thoughts about the Eurovision Song Contest. They also organize and play online games through their website. The club members get together for Eurovision themed parties and meetings in Istanbul every year. Fans also get together on occasions like concerts, meeting with artists etc. These moments are shared with fans all over the world via social media, which is used effectively. OGAE Turkey, can just like other clubs in other countries, help fans with Eurovision tickets.

For now, there is no sign of Turkey returning to the Eurovision Song Contest, but Turkish fans are looking forward to a change of government on the 24th of June. Can that bring Turkey closer to Europe, and back to the contest? Only time will tell.