Can Martina Bárta live it to the growing expectations in the Czech Republic? Her German band now confirmed that she is the chosen one to represent the country that qualified for the final of the Eurovision Song Contest for the first time in 2016.

This year marks the 10th anniversary since the debut of Czech Republic at Eurovision Song Contest and the broadcaster Česká televize (Czech Television) is still trying to fine tune things. Last year, Gabriela Gunčíková finally brought the country to the Eurovision final for the very first time. For Kyiv, Czech Television made an open call for the songs and received more than 300 songs. Later, Czech Head of Delegation Jan Bors revealed that they narrowed them to TOP 5 songs and were looking for the artists to combine with these songs, and now the artist has been selected and the recordings of the song are in full swing.

When Czech television got more than 300 songs, somebody had to cut them down. This was a job for three men: Head of Delegation (Jan Bors), Manager of the Eurovision project in the Czech Television (Jan Potměšil) and Music supervisor for recording the songs (Jan Maxián). Then it came for the professional jury to choose the best song. Members of this jury were Martin Kumžák, Jiří Škorpík, Michal Pavlíček, Michal Dvořák and Ota Balage. All of them are respected Czech musicians, composers or band leaders.

The above picture was posted yesterday on the official Facebook page for Czech Republic at the Eurovision Song Contest. We can see Jan Maxián, the Music supervisor of the Czech Television when it comes to recording the songs. The team is now in London to record the song. The forehead in the picture would likely be the representative, which then started the speculations. That rules out all male singers the fans wanted to represent Czech Republic in Kyiv like Mikolas Josef. But it also rules out all blond female singers.

Just as fans were speculating and came up with Martina Bárta’s name, the Jazz singers German band 4 to the bar posted on their website that it is indeed true. They wrote that they are proud that their singer and hornist since early 2014 has been chosen for the Eurovision Song Contest. Few hours later, they removed the post – maybe as the Czech broadcaster told them, that they themselves hadn’t released the news, but the screenshot below shows their post. 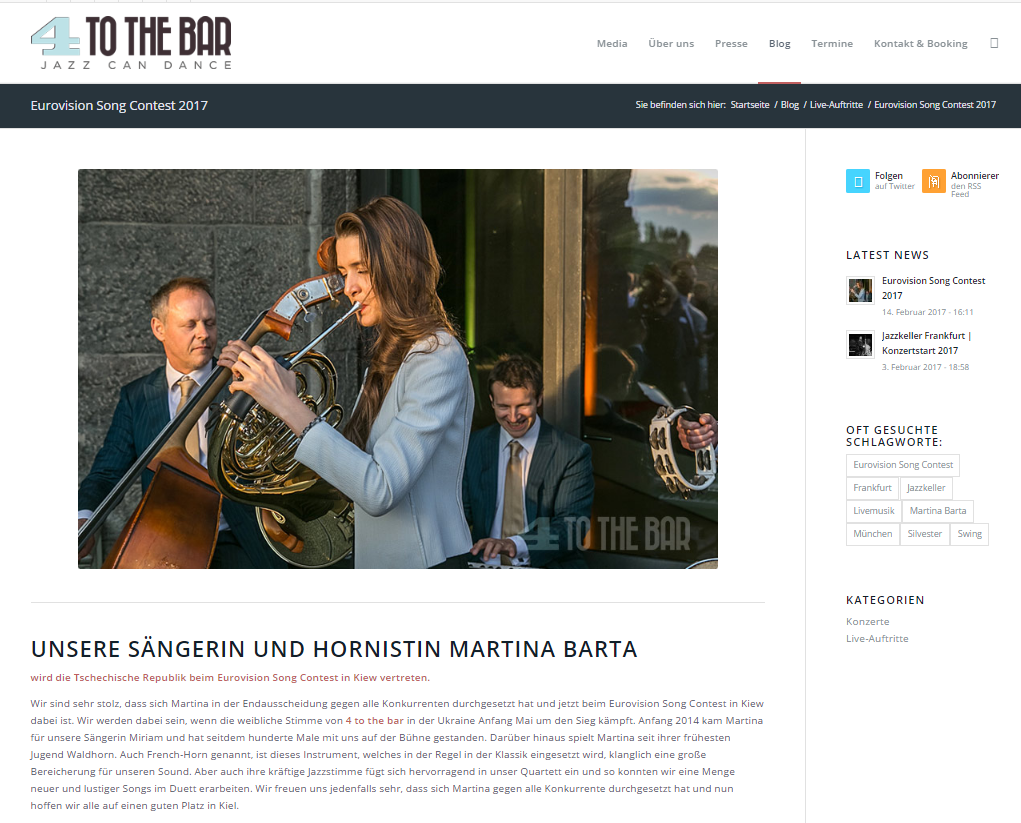 So far we know that the Czech song will be performed in English and composed by a foreign team, just like last year. The quality of the foreign songs was significantly better than the few ones from Czech composers, according to Jan Bors in a Q&A video with Czech fans. He also said that they didn’t prefer any music genre and went primary for the quality. The most of the songs were ballads like their 2016 entry I Stand.

In the video below you can see Gabriela Gunčíková with that song from the final of Eurovision Song Contest 2016.