Yesterday an album launch event was held by Arts Printing House in Sweden for Donny Montell’s new album #BLCK. To go along with the title the presentation of Donny’s fourth album took place in darkness and includes his Eurovision entry in several mixes.

This will be Donny’s fourth album, which he has been creating in his basement for two years.The two years of work has included help from Spanish, Swedish and Lithuanian producers.

Donny says this album offers a Scandinavian quality and modern sound. The album has been his most expensive to make and he has been involved creatively in all it’s development, including the album art work.

Manager Martin Silence is quoted as saying the cost was more expensive that a car.

The tattoos covering Donny on the #BLCK album cover took over seven hours and has the song titles embedded in the design. All the songs are considered to be of a global standard with most of the album sung in English for mass appeal.

See alsoVideos: Watch all 26 Eurovision acts from Eurovision In Concert 2016

The album should cost about 6 Euros digitally and the physical CD will be 15 Euros. The album, which Donny has promised to sign, should you run into him, will be available in stores and gas stations in Sweden as well.

Take our quiz to see how much you know about the Lithuanian representative this year, so you have some small talk to get the conversation started.

Do you know in which country Donny won a musical Grand Prix in 2008? This quiz will show if you know Donny Montell as much as you might think so. 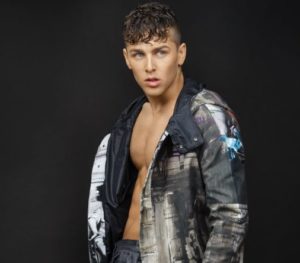 Donny will sing I’ve Been Waiting For This Night in 9th position in the second semi final on May 12th.