Yesterday the selection process in Moldova at the 2012 Eurovision Song Contest ended with the final show of O Melodie Pentru Europa. Out of twenty-one entries participated fighting Pasha Parfeny took the ticket for the song contest with his song Lăutar.

This year the Moldovan broadcaster TRM, gave an early start to prevent low interest problems as they faced last year and submissions to the selection O Melodie Pentru Europe 2012 opened last autumn. Twenty acts qualified through with an audition stage and the twenty-first act was determined by the public after an internet voting.

The final show started at 18.30 CET (19.30 local time) and lasted three and a half hours and was broadcasted live by the radio channels via M1, Radio Moldova; tv channels via TRM1, TRM International and of course the official website, eurovision.tv’s ESCTv.

In the show, there was two suprise guests, one was the Ukranian representer Gaitana who performed Be My Guest and the second act was Swiss representative group Sinplus who performed Unbreakable last night.

The show started with the interval act with some composure which was played by an panflute orchestra. After shortly announcing the procedure of the selection, the show continued with the performances of twenty-one entries. There was all kind of genres: soul, RnB, ethno-pop, euro-dance, ballad, rock and so on.

The running order of the night was:

As it flashes to the eyes, former representative Geta Burlacu, who participated in the 2008 Eurovision Song Contest in Belgrade with the song A Century of Love, was back at the Moldovan selections O Melodie Pentru Europa. Unluckily, Geta couldn’t make it to the final back then.

Previously on TRM announcement, 2009 representative Nelly Ciobanu was on the list of first twenty participants who qualified through to the final stage with the song Turn on the Light. However, we were not able to see her yesterday evening. As it will be remembered, Nelly succeded one of the best performances in 2009 with the song Hora Din Moldova. 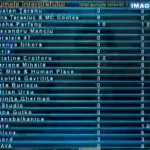 The final results of the night was determined after an equal combination jury and televoting. Christina Croiteru won the televoting, however she succeded only 4 points coming from juries where Pasha Parfany took the 12 points of jury and 10 points.

The final standing can be viewed by clicking the image on left.

The final top three were:

The result shows that Pasha Parfany will be representing Moldova at the 2012 Eurovision Song Contest with the song  Lăutar. Below you can see Pasha’s performance from yesterday.