The bookmakers have tipped her as the winner and DR’s online visitors are not in any disagreement. Simone Egeriis is the absolute top favourite to win the Danish final on Saturday – and thereby represent Denmark at the 2013 Eurovision Song Contest.

Already before anything was heard from the 10 competing songs for Dansk Melodi Grand Prix this year Danish bookmaker Danske Spil had Simone Egeriis as favourite to win. Once the songs were published they adjusted their odds making her an even bigger favourite – and the same thing counts for the visitors of Danish broadcaster, DR’s website.

Danske Spil first had Simone to share the favourite spot with Emmelie de Forest, but as the songs got out Simone they made Simone the sole favourite all alone.

Odds from Danske Spil – before the songs were out and afterwards:

Every year DR has a poll up on their website asking its visitors to vote, unofficially, for one of the 10 songs. The poll isn’t always correct, but this year the ones voting are at least in agreement with the bookmakers.

Below you can see a screenshot of the current voting – and after that a video uploaded by Simone where she, in Danish, sends a message to her fans – and show clips from the rehearsals for Dansk Melodi Grand Prix: 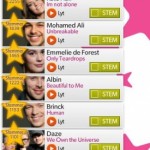