Former Eurovision participants Suzy and Hovi Star have both recently published controversial statements which made fans upset. Both of them have blamed in on their account being hacked.

Personal information is not 100% safe these days. Hackers are willing to exploit these vulnerabilities. Eurovision artists are no exception. Suzy (Portugal 2014) and Hovi Star (Israel 2016) claim they are now both in the list of celebrities whose social media have been hacked.

On 9th of May, a controversial tweet originated from Hovi Star’s account. The tweet criticised Eurovision fans calling them “the worst” because of their music taste. The immediate reaction from the fans ranged from disappointment to outrage. Some of the fans lashed out at Hovi for his “ungrateful” comment.  However, Hovi removed the tweet hours after the controversy started. 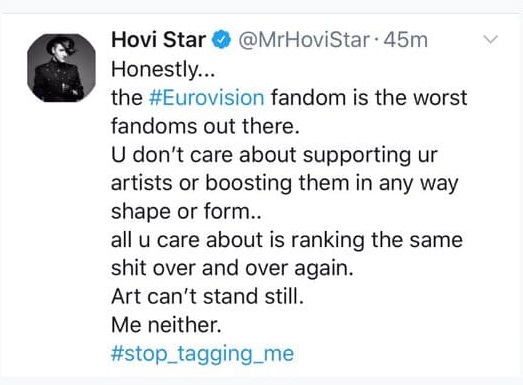 Subsequently, Hovi explained that he was hacked and that he did not write that tweet. He instead turned his anger towards Eurovision news outlets that reported the statement.

Unfortunately, this was not the only case that happened last month.  Giannis Argyriou, a EuroVisionary contributor, published on Facebook that Sandro will not be selected for Eurovision 2021. Suzy, the Portuguese representative in 2014, made a response. In the comment, she allegedly says: “So great news, he was so bad.”  The comment which is still available on Facebook got some angry response from the fans. Nevertheless, Suzy afterwards explained too that her social platforms were hacked.

Notwithstanding the latter, some fans have received these explanations with a bit of scepticism. Regardless of this, Suzy and Hovi are not the only Eurovision artists that have been hacked. For instance, Bulgarian band, Equinox’ Instagram account was hacked and that account was never recovered.