01/06/2020 Update – The Cypriot broadcaster CyBC/RIK has now confirmed that Sandro will not be representing the island in next year’s Eurovision Song Contest. See further below for the broadcaster’s official announcement.

Sandro is a German singer of Greek and American descent. In 2018, he participated in season 8 of The Voice of Germany and, in 2019, he came fifth in Russia’s New Wave contest for young performers of pop music. In November 2019, it was announced that the artist had been internally selected to represent Cyprus in Eurovision 2020 with Running.

Countries that will be sending the same artist for 2021

See alsoOverview: The acts from this year's cancelled show who will return for Eurovision 2021

With a post on its official Instagram account, the Cypriot public broadcaster has now officially confirmed that Sandro will not be representing the country in Rotterdam 2021.

According to Greek magazine TV Mania, the broadcaster will be internally selecting a different artist for 2021 and contacting record labels for the selection of a song. Allegedly, this will be either an already popular artist in Cyprus and Greece or an artist of Cypriot descent.

This makes Cyprus the first country to have selected internally for 2020 that will not be sending the same artist to Eurovision 2021. 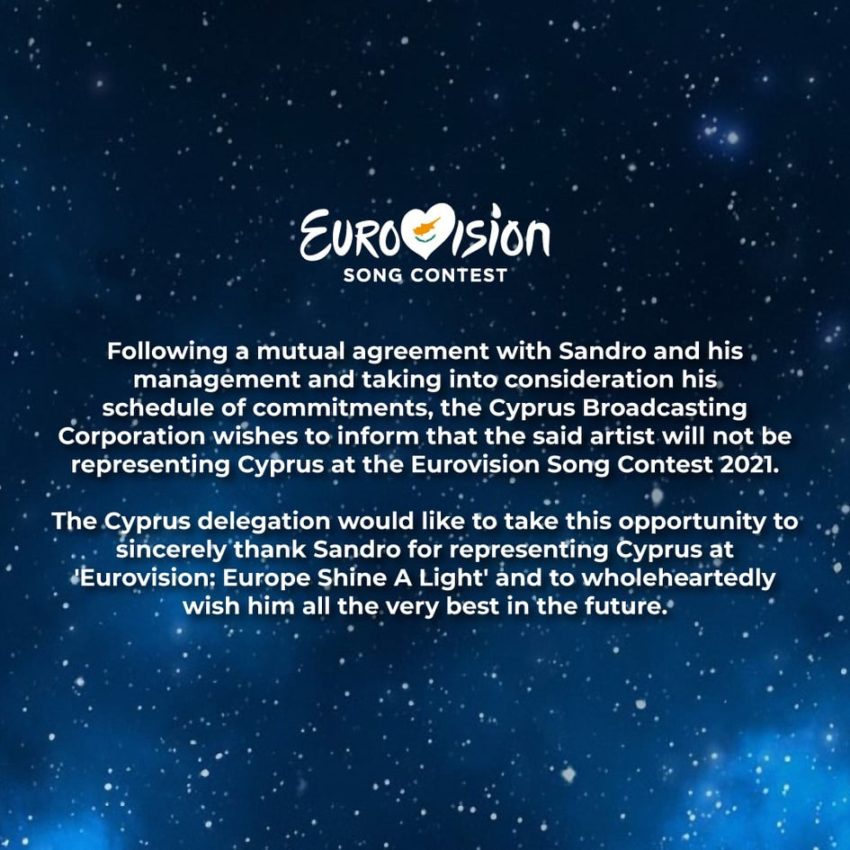 Countries that will be choosing entrants from scratch for 2021

Cyprus will therefore be joining the countries who have already expressed the intention of choosing a different artist for next year. Some of the countries that will be selecting artists from scratch have an established national selection format and so far include Denmark, Estonia, Lithuania, Norway, Sweden and Finland.

In the following video, you can revisit Sandro and his unplugged version of 2020 Cypriot entry Running.