Out of the 16 finalists, DoReDos were chosen as the winner of Moldovan national final, O Melodie Pentru Europa 2018, and therefore will represent this country in Lisbon, Portugal in May.

Earlier this year, in January, the Moldovan broadcaster TVM revealed the list of shortlisted artists for their national final. During the live performance of those 28 songs, TVM chose the lucky 16 who would compete directly in the final. That meant that the broadcaster decided to cut the previously announced semi-final and host only one final.

Let’s take a closer look at the songs. Is there anything that may follow the Sunstroke Project’s success from Kyiv?

Tolik opens the show with a typical Eurovision ballad. He is on the stage alone only with three female vocalists. To match to the lyrics, we see a lot of broken glass on the LED screens in the background.

Lavinia Rusu follows with a faster song than Broken Glass. Two male vocalists and one pair of dancers join her on stage as well as a lot of colourful lasers in the projection. The vocalists are involved a lot in the performance and that makes the song sound more powerful than sung solely by Lavinia alone. Unlike the first song, Lavinia sing in the Romanian language. The title is translated as Somewhere Else.

Bella Luna is a male/female duo that comes with a love ballad. They tell us the story of sharing the Moments together, which remind anyone of the Oslo slogan “Share The Moment”. The climax is not so obvious, but the two female vocalists join BellaLuna in the front stage at that moment. During the performance, we see the space-like graphics in the LED background.

Endlessly is the first song tonight that made its way to Moldova from Sweden. OneVoice – a sister duo of Ylva and Linda Persson – is the composer together with its Swedish team. Both sisters are doing the backing vocals for Anna Timofei that serve this mystical ballad with a grace. It needs a soft voice, and young Anna does it really professionally and without any mistakes. In the mystic style of Endlessly, the background graphics are a little bit abstract. All the three women wear gorgeous long white dresses.

After BellaLuna, Ilia and Dasha are another duo and they are not the last ones tonight. After two ballads, TVM switches again to one of the up-tempo songs. Even though the song sounds and looks very modern, the performance is not completely flawless and the harmonies are sometimes out of tune. Two female vocalists and two male dancers are also on stage during the performance. This entry sounds quite repetitive after a while, and also the lyrics would deserve a revision.

This rock group with national instruments and elements is not a newbie in O Melodie Pentru Europa. They already took part in the past, but with no big success. Is 2018 their year? They bring one of the few songs in Romanian language and in the huge number of ballads tonight, this harder entry may actually stand out. As of the staging, we see the whole group on the stage – the lead singer, two electric guitarists, a drum player, female violinist and Pan flute player. In the background, there are flames and some war video shoots. They work quite OK with the song as the title translates into English as Heart on the left.

And, the stream of rock songs continues with Constantin Cobîlean and his song Only You. A strange title for a rock song? Well, that’s for the Moldovan speakers to decide. Constantin is joined by a band on the stage and the LED graphics seems a little bit too chaotical, but it fits the idea of this performance.

DoReDos are definitely one of the favourites to win tonight’s show. Mostly because their song comes from the so-called “dream team” of Philipp Kirkorov and John Ballard. The song also includes the national elements and trumpets so maybe they hope to fly on the success of the Epic Sax Guy from Kyiv. The refrain is quite catchy, even though it is a regular 4-chord song. Also, the lyrics sound like a basic rhyming with no bigger creativity.

What worth to point out is definitely the staging with five big rectangular mirrors and the dancers and some members of the group DoReDos behind them. Only those who are singing or dancing at the moment are in front of those mirrors. Vocally they are on point during all the performance including all the harmonies. In the end, the national elements in the sound and dance, together with the vocal performance is the combination that may work well with both the juries and the audience.

SandyC & Aaron Sibley – Once Upon a Time

After a quick dance entry, SandyC and Aaron Sibley come with a fairytale-like love ballad quite apt titled Once Upon a Time. Aaron is sitting at the white piano while SandyC is in the background. During the performance, she moves to the front stage and in the end, she returns back. The song is really sweet with no dis-harmonies throughout the performance.

Anna’s song is more than a normal ballad, a rock ballad, and a good one of its kind. She is alone on the stage and no backing vocalists in the background to save her. But that’s not something Anna needs. She slays it with a grace and the performance is vocally flawless.

Nicoleta stands out among the other finalists as she brings the fast flamenco-themed song sung in the Spanish language. Four male dancers with black hats are dancing around Nicoleta as a trumpet player appears in the last part of the song. Essence of the South is quite an apt translation as this song could fit really well to the Spanish national final rather than to the Moldovan one.

Doinița Gherman is maybe one of the most well-known participants tonight and she again joined her forces with Ylva and Linda Persson. They worked together already in 2016 when she had her entry Irresistible in the national final. She didn’t win but represented Moldova in the Baltic song contest with that song. And on both occasions, the Persson sisters were with her on stage.

So it is no surprise that they flew from Sweden to Moldova to do the backing vocal for their entry, and support Doinița. Besides that, two female dancers with flame-like sleeves are on the stage just as a nude muscled male dancer dressed only in his underwear. As a bonus to the vocally flawless performance, this uptempo dance song is not entirely in English but partially in Romanian as Doinița also recorded a full Romanian version of the song. Bilingual songs may work well at Eurovision, so let’s wait if 2018 is the year of Doinița.

Also, Felicia Dunaf comes with a faster song. She is joined by three male dancers and two female vocalists on stage. The song is vocally on point and the background graphics are in the theme of the title Alien and looks like a space nebula.

Viorela – The Gates of Love

Viorela starts her performance playing on the violin, but quickly switches to the mic and as she starts singing, her friend continues playing the violin to the sound of this love ballad. The song is not an easy one, but Viorela sings it with no difficulties. There is also a male dancer and a female backing vocalist.

Vera brought a bed with her on stage! The bed has rubber stripes with which Vera and her dancer (maybe a lover?) work during their dance. The whole concept reminds us of a Sia video. It is also worth mentioning that Vera dances a lot during her performance and still is able to sing through it all. And she is flawless. That is something that should be at least partially awarded.

Ruslan closes the show tonight with a party disco song. Four vocalists are also on the stage and behind their microphones, they also dance a little. Unfortunately, Ruslan is not sure in his vocals and the whole concept of the song and its performance is a little bit more dated.

After the introduction, the show started off with the songs one by one with just short interruptions from the green room beside the commercial ads. After the last performance, the voting opened and we saw few interval acts including Sunstroke Project, Moldova’s last representatives. The voting closed and then jury voted. After the commercial break, the votes of the televoting were revealed. In the end, DoReDos performed again their ESC entry My Lucky Day.

After the jury voting, TOP 3 was: DoReDos, Vera Țurcanu, and Anna Odobescu.

TOP 3 of the televote was: DoReDos, Tolik and Nicoleta Sava.

In the end, the winner was announced – DoReDos, followed by Vera Țurcanu and Doinița Gherman & OneVoice. The full results are in the table below. 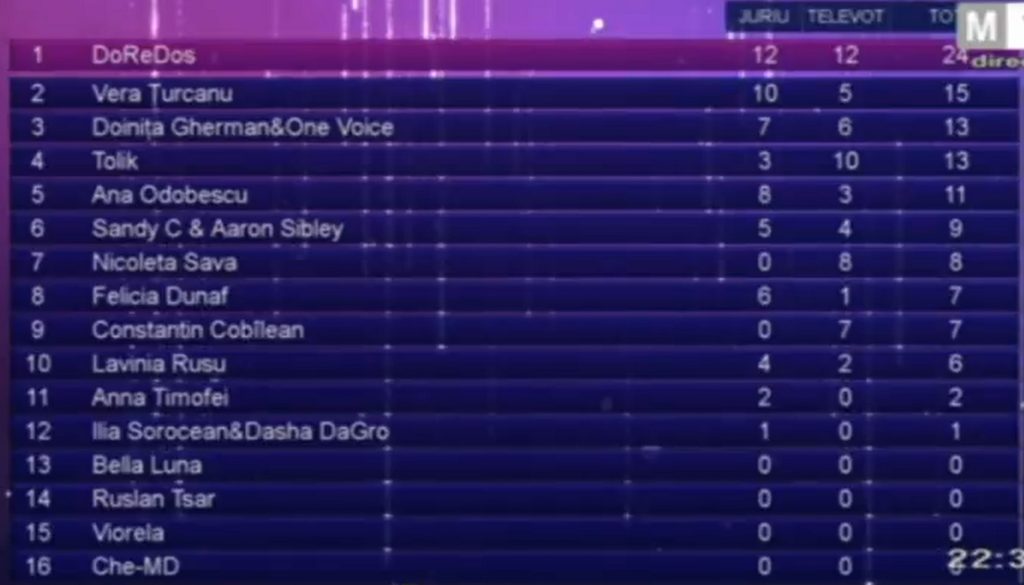 Moldova in the Eurovision Song Contest

Moldova has a good qualification rate in the Eurovision Song Contest. Out of its 13 appearances, Moldova failed to qualify only 4 times – in 2008 and then during a 3 years strike from 2014 to 2016. With achieving their best result so far last year in Kyiv with the second participation of Sunstroke Project, Moldova now has high hopes to win soon. If 2018 is the of Moldova is difficult to judge now, but in the meantime, you can remind Hey Mamma in a special multicam version.