You don’t know what to expect in Ukraine? EuroVisionary provides you with a comprehensive guide to the local customs and cultures that you might experience. Here is all that you need to know for your upcoming trip to the 2017 Eurovision host city Kyiv.

Ukraine is a country steeped in rich tradition. Despite only being an independent nation since 1991, Ukraine’s culture and traditions stretch over thousands of years. Apart from cultural differences there are also local customs that you might not expect as a foreigner. I am English, but I have family who still live in Ukraine and whom I visit often. I will tell you what other guides don’t do, to make sure that you are fully prepared for your trip to Kyiv. 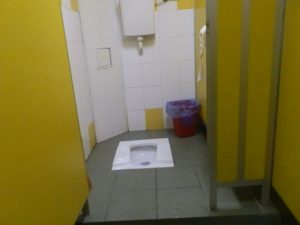 This is mainly for the ladies. While toilets in the hotels and most restaurants will have traditional western toilets, this isn’t the case everywhere. Train and metro stations along with some shopping malls will have squatting toilets, pretty much posh holes in the floor. Toilet facilities in these places are usually manned by a lady behind a desk. In most places using the toilet is free, but toilet paper can be purchased from the lady at the front desk and when you pay you don’t get very much of it. My advice is to carry your own.

If you are staying with a Ukrainian family or renting a room from someone in Kyiv, it is custom to bring a gift to say thank you. Ideally, this should be something from your home town or country. So think of something unique to the country you are from. It doesn’t have to be an expensive gift. When I visit my family in Ukraine I always take with me some good English tea and English chocolates. If you want to buy your host some flowers, only buy in odd numbers. Even numbers of flowers are strictly for funerals and is considered bad luck otherwise. 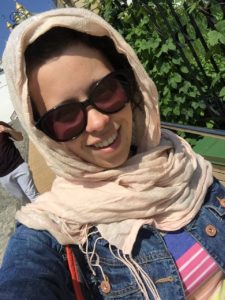 Ladies should wear a head scarf when entering a Ukrainian Church

There is a certain required dress code when entering a church – even for tourists. Men should take off their hat before entering the church and women should wear a head scarf and skirts should be below the knee in length. I have seen a woman denied entry from a church because her skirt was above the knee.

There are some beautiful and incredible looking churches in Kyiv namely St Sophia and St Michael along with the magnificent Kievo-Pecersk Lavra.

There are a couple of bank holidays that are observed in May and depending on when you travel to Kyiv for the upcoming contest, it could affect you.

The 1st and 2nd of May is known as the International Workers’ Day (Labour Day) and most places will be closed. Following on from this is Victory Day which is observed on the 9th. Victory Day was a big celebration until the recent Ukrainian-Russian tension surfaced. I have been in Kyiv on Victory Day and seen a wonderful concert that lasted from early afternoon until late in the evening, notable Eurovision singers such as Ruslana and Tina Karol have performed on Maidan on such events. This year, the 9th May coincides with the first Semi Final of the Eurovision Song Contest so it is extremely unlikely that any special events will take place to commemorate this day this year. 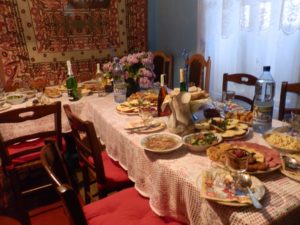 Ukrainians love to treat their hosts to copious amounts of food and alcohol.   Over feeding guests is tradition!

If you are invited to dine with your hosts, be prepared for it – there will be many courses, it is considered rude and disrespectful if you don’t eat so try to make the effort. As well as food, there are many toasts that will be made. Usually each person at the table will give a toast. The refusal to drink alcohol is also considered rude. If you don’t want to get drunk then it is best to say at the start of the meal that you can’t drink alcohol because of medication you are taking. That way, the host will not be offended.

In Ukraine it isn’t common for tea and coffee to be served with milk so it is almost always necessary to ask for it in addition. You can learn how below.

LGBT issues are still a taboo subject in Ukraine, however, attitudes are slowly changing for the better. The most recent Equality March that took place in Kyiv at the end of last year went by fairly peacefully. The current Eurovision winner Jamala signed an open letter to Amnesty International calling for the Kyiv government official to protect the parade marchers. This came as a result of Nationalists promising a ‘bloodbath’. The government assigned 5,500 police officers to protect the 1,500 marchers. It was later reported that 57 people were detained but later released. However, earlier on in the year an LGBT march in the western city of L’viv was called off due to fear of violence from the far right.

Homosexuality in Ukraine isn’t prohibited by law. However, I would suggest airing on the side of caution when in Kyiv and avoid any outward public displays of affection.

Kyiv is not one of the most disability friendly cities, and people with disabilities may find it difficult getting in and out of metro stations. The metro stations are deep underground and in most places you can only get up and down by stairway or escalators. Some of the metro stations have small but very steep ramps and it would be very difficult to negotiate around them safely. Pavements and roads can be littered with pot holes which can also make getting around generally difficult.

The official language of Ukraine is Ukrainian. However, in Kyiv, both Ukrainian and Russian languages are used. In most recent years the Ukrainian language has been used more widely. You would certainly impress people if you tried to speak some Ukrainian while in Kyiv. 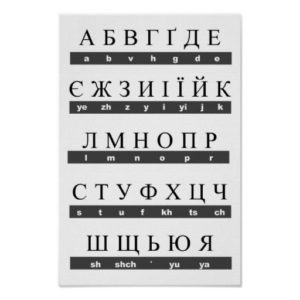 If you want to ask someone a question, a common phrase to remember is Скажить будьласка, де? – Skazhit’ bud’laska, de? – Tell me please, where is?

Майдан назалежності – Maidan Nazalezhnosti – Independence Square (or simply say Maidan, they will know where you mean)