Imagine a live form of a Disney fairytale and you have Spain’s 2018 Eurovision performance. The love, the complicity and elegancy of the couple will make your heart melt and get caught up in the moment.

Spain is automatically qualified for the final. Their start number is yet unknown. They are represented by Amaia y Alfred and the song Tu Canción, which is written by Raúl Gómez and Sylvia Santoro.

Amaia and Alfred also took the stage once more during this first dress rehearsal. Once more, the couple changed their outfit. While Amaia decided to try on a third dress more towards nude tones, Alfred’s went back to the first ever rehearsal suit. Check it out: 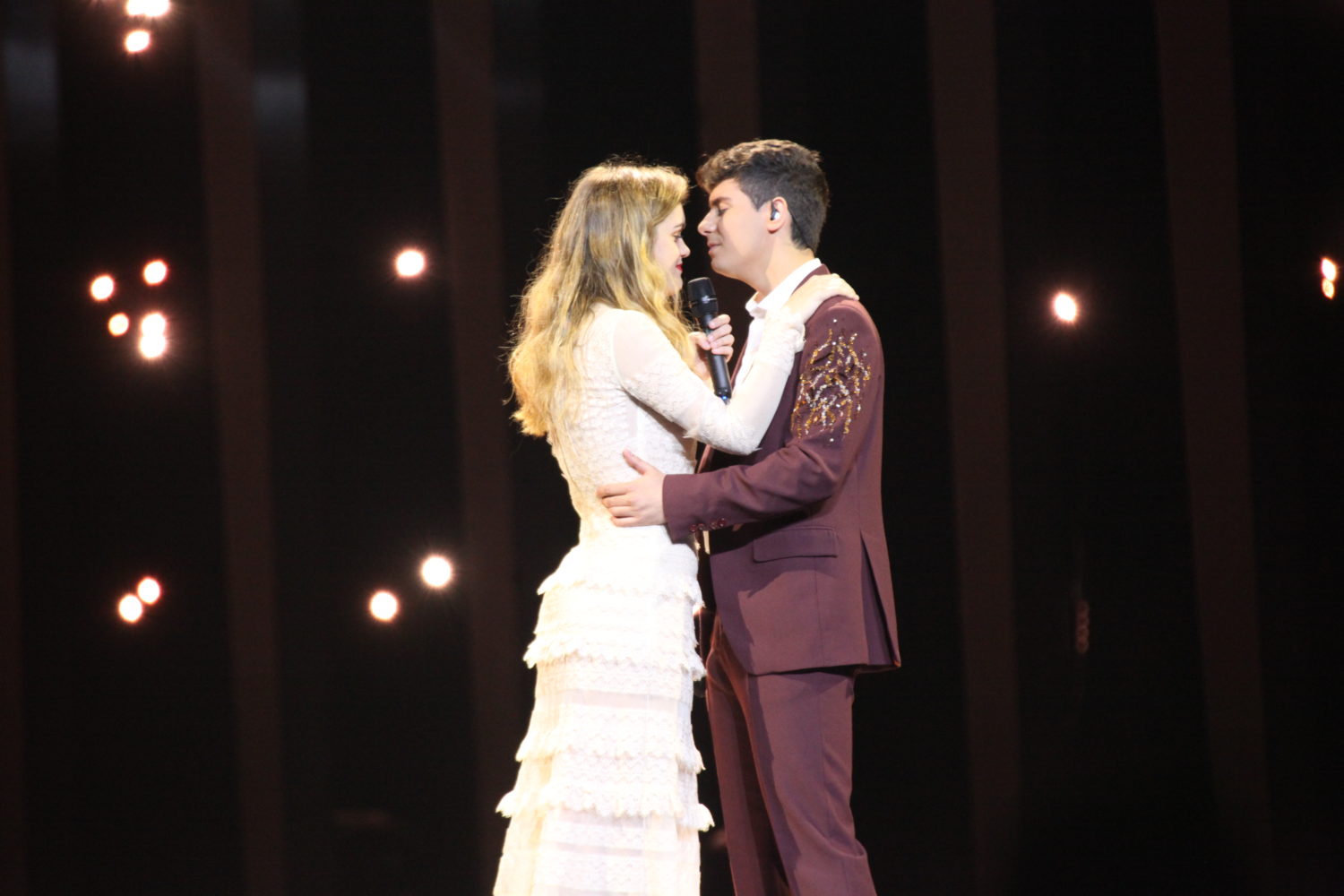 Opinions expressed during our second rehearsal coverage are personal from the mentioned writers.

Pedro, Portugal (in the press center) – This is such a lovely song but I am afraid the staging could be better as it is too empty. I am sure a few fireworks could turn it into a magical moment as the song does contain that magic feeling to it and a big momentum towards the end. They’ve changed their outfits and for better, especially Amaia that is now wearing a beautiful long dark dress. I am afraid Spain will continue its series of weak results.

Jens-Erik, Denmark (in the arena) – From the very first time I saw the Spanish song and performance in Operación Triunfo I fell in love. And I’m still very much in love with Tu Canción. I have no idea what the words they’re singing actually mean, but I sense a very special connection between Amaia and Alfred. As much as I like it, they sadly seem to disappear on the big stage in Altice arena. I miss all the close ups and goosebumps you get watching the song and performance on a TV screen.

A white dress and a red suit were the clothes of choice for the young duo. You can guess yourself who wore what. Standing apart on the stage, Alfred starts to walk towards his little love bird, while Amaia takes her time heading in from the opposite side. They have ditched the piano playing from the Spanish final, and are all about the singing now. Second rehearsal saw the music cut while Amaia was singing. Her shocked face was a picture to see. When they meet they hold hands and sing into each others eyes. Soon they’ve had enough of that and turn to face the audience. Amaia takes a walk around the stage , with Alfred following her like a lost puppy. Lights come on in the background, and all is well in their perfect world.  A great performance from the duo – one to watch based on this rehearsal.

How Amaia y Alfred was selected

Spain used their traditional format Operación Triunfo to select their entry for the Eurovision Song Contest. Five singers and a total of 9 songs had made it to the final, which was held on the 29th of January. The singers were matched in various ways for the 9 songs. Amaia and Alfred were both singing solo entries as well in the competition, but it was their duet which made it among the three in the super final.

At the end, Tu Canción won with 43% of the votes. Aitana was the runner up with 31% for her solo song Arde while she also finished third with the duet song which recieved 26%.

Spain at the Eurovision Song Contest

It was back in 1961 that Spain debutted at the contest. They have won twice, following each other, in 1968 and 1969. As Big4, which later became Big5, was invited back in 1999, Spain has been guaranteed a place in the final. As such they aren’t taking part in the semi-finals, however they do vote in them.

Pastora Soler represented Spain at the 2012 contest. She finished 10th with the song Quédate Conmigo. Two years later, Ruth Lorenzo did the same. Those two 10th places however is the only top10 results, the country achieved since 2004.

The past three years, things have been particulary bad for the Spanish fans. Do It for Your Lover finished 26th last year. In 2016, Barei came home with a 22nd place, which was one place worse than Edurne got in 2015.