Today came the official announcement of the well known Cypriot band Minus One to represent the country at the 2016 Eurovision Song Contest. The song will be written together with Swedish Eurovision veteran Thomas G:son.

A few days ago, the news started spreading that Cypriot broadcaster CyBC had opted for an internal selection this year giving the well known band Minus One tickets to Stockholm, Sweden to represent the island at the 2016 Eurovision Song Contest. Today CyBC officially announced that Minus One will fly the Cypriot flag in Stockholm – and that it will be with a song written together with the famous Swedish composer Τhomas G:son, a Eurovision veteran who won the Eurovision Song Contest in 2012 with Loreen’s Euphoria.

CyBC, after the decision of participation in the Eurovision Song Contest 2016, to be held in Stockholm on 10th, 12th and 14th of May 2016, today we announce that we trust the representation of Cyprus in the hands of the popular band Minus One. The song, which will be presented to the public at a time yet to be announced, will be a collaboration of the band Minus One and the successful Swedish composer Thomas G:son. Minus One is among the most loved rock bands of Cyprus, for six years making gigs with success in Cyprus and abroad. Last year they reached the final selection phase of the competition which was launched by CyBC for Eurovision Song Contest 2015. Thomas G:son is of the most famous composers of Sweden. As a composer he has represented many countries in the contest and his songs reached the TOP 10 of the table. He was also the composer of Euphoria the song that gave the victory to Sweden in 2012.

Minus One was already a well know band when they took part in the 2015 national selection on Cyprus and ended on a third position with the song Shine. You can read more about the band in our previous article.

A discussion about whether or not Minus One was the right choice to represent Cyprus broke out on our previous article, where a user by the name ESC FAN published his opinion. He was concerned that after George Solonos the band was no longer what they used to be. This brought the lead singer of the band to publish a reply to the fan who had a bad experience at a concert a few weeks ago. 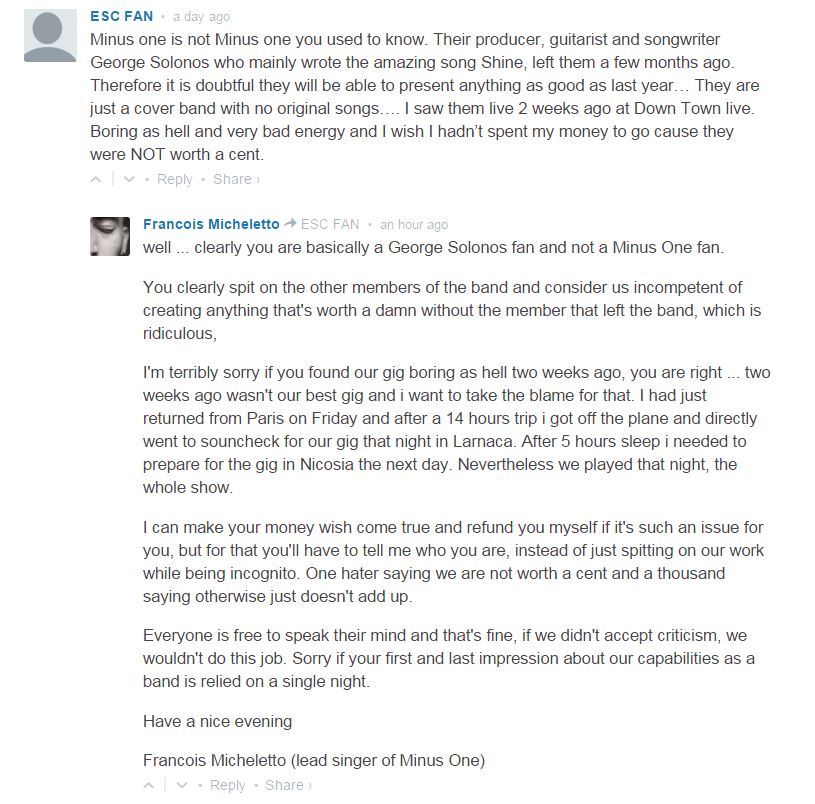 Cyprus at the Eurovision Song Contest

The small island with a population of just around 1,2 million people joined the Eurovision Song Contest in 1981. Since then they have participated every year except from 1988, 2001 and 2014. The best result for Cyprus is a fifth place which they achieved a total of three times, last time being in 2004.

Since the introduction of semi-finals things have been a little tough for Cyprus who failed to reach the final four years in a row from 2006 to 2009, and again in 2011 and 2013.

This year, in 2015, Cyprus was represented by John Karayiannis who reached the final where he finished 22nd with the song One Thing I should Have Done. In the video below you can check up on how that song was performed at the Eurovision Song Contest:

Cyprus is the fourth country that has announced its representative for the 2016 Eurovision Song Contest, after Netherlands, Armenia and Montenegro