Welcome back to former Eurovision artists Kikki Danielsson and Jessica Andersson. Months of speculations finally came to an end today as the participants for the 2018 Swedish national selection were presented today.

Melodifestivalen have fans all around the world. The Swedish national selection is for many Eurovision fans bigger than Christmas and New Years Eve. No matter if you share this obsession or not, it is hard to deny that its existence is a big part of Eurovision.

Today, the participants who take part in the 2018 edition were presented at a press conference. As often seen before, the line-up includes new talents as well as experienced artists. Some of them are very familiar faces to Eurovision followers, and others are hoping to become just that.

Over four regular heats, and one second chance heat, starting in Karlstad on the 3rd of February 2018, the participants will fight for spots in the final, which takes place in Friends Arena on the 10th of March.

(Not in performing order) 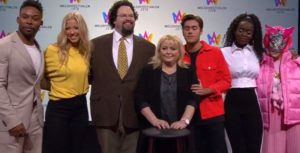 With six wins, Sweden is one of the most succesful Eurovision countries – they are only one victory away from matching Ireland’s seven wins. Since Ireland’s last victory in 1996, Sweden have won three times, in 1999, 2012 and 2015. And where Ireland have missed the final seven times including the last four years, Sweden have only been left out once, in 2010.

In 2017, Sweden was represented by Robin Bengtsson. With 344 points he came fifth with the song I Can’t Go On. In the video below you can enjoy that entry in a special multi cam edition.