Are Jedward being bullied in the Celebrity Big Brother House? Some people think so. In last night’s show, Jedward were involved in a massive argument with Nicola McClean and Calum Best.

Fans of Celebrity Big Brother UK have branded the other housemates bullies for their treatment of John and Edward over the past week. Last night shown the twins in an explosive argument between former glamour model Nicola McClean and reality TV star Calum Best.

Last night’s argument started after one of the boys accidentally walked in on Nicola getting changed in the bathroom. Nicola accused them of trying to see her naked and blasted them for not knocking on the door first. Although viewers did see Jedward knock on the door and entering after not hearing a response. Nicola continued to blast them, saying ‘They just walk in! I have s**t like that! Disrespect! They have the right to walk in on me as I’ve been a Page 3 girl? They’re horrible.’ 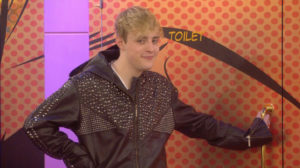 Nicola McClean accuses Jedward of trying to see her naked

But it didn’t end there. The housemates took part in a task which saw the chance for each housemate to receive a letter from home. But not everyone would get their letter. Big Brother made some housemates decide who would receive their letters from home and who would have their letter ripped up. Nicola McClean decided to rip up Jedward’s letter.

Later in the evening the housemates had to nominate the person they wanted to be evicted face to face. Jedward were nominated by every single housemate, but appeared to take this in their stride. Then it was Jedward’s turn to nominate. The pair opted for Nicola and Calum. This was no shock to Nicola but the look on Calum’s face was evident. He was not happy.

Once the nominations were over, John got into an altercation with Nicola. He accused her of making up lies about them. The former glamour model then accused John of trying to intimidate her and some of the other housemates joined in. Calum Best tried to defuse the situation but while siding with Nicola. John wasn’t having any of it. “I get it you’re trying to save the day like a hero!” he snapped. This infuriated Calum however, fans rejoiced at the reality star being called out once and for all. 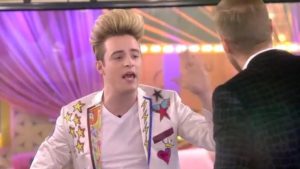 A little later on, Jedward were seen in the diary room talking to Big Brother. They said “We’re not included in the little clique in the house,” they said. One half of the pair continues: “I can have a conversation asking ‘How’s it going?’ and I just get a blank face all the time’.

One housemate will be evicted today in a secret backdoor eviction. This is considered the worse type of eviction because whoever goes will literally exit by the back door. This means that they win not exit the house to the usual fanfare of the live audience. The housemates up for the backdoor eviction are: Jedward, Nicola McClean, Calum Best, Kim Woodburn and Jamie O’Hara.

The outbursts from the other housemates appear to have done Jedward a favour, the boys have quickly become the favourite to win the show following last night’s episode. Many fans are calling for Nicola and Calum to be evicted.

Our other articles about Jedward in the Big brother house:

In the video below you can watch Jedward perform their two Eurovision entries; Lipstick from 2011 and Waterline from 2012: