A Russian magazine has revealed the interval act for the 2009 Eurovision Song Contest. In a video you can see the children preparing for the big event in May where they will all be small look-a-likes of Eurovision winners like Dima Bilan, Ruslana, Helena Paparizou and more.

Life.ru has published a rehearsal video of what is mentioned as the interval act for the 2009 Eurovision Song Contest final, but it hasn’t yet been officially confirmed. In the video you see a group of children singing Diva (Israel 1998), My Number One (Greece 2005), Wild Dances (Ukraine 2004), Molitva (Serbia 2007) and Believe (Russia 2008). If you look closely in the video you will also see some dressed in ABBA costumes so we might get to hear Waterloo (Sweden 1974) as well.

It is mentioned to be a group of children from various countries and they will all perform as close to the original Eurovision Song Contest performance as possible. The youngest of the children is a just 5 year old girl acting as Marija Šerifović.

See the video which is mentioned to be the 2009 Eurovision Song Contest interval act and enjoy the images below. 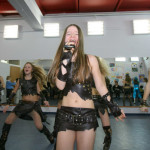 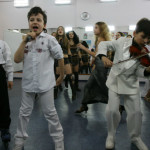 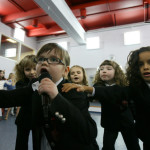