While we are getting closer to the 2015 entry deadline Romania has now chosen their artists. Voltaj has become the winner of Selectia Nacionala and they will represent Romania in Vienna with the song De La Capat.

The vocalist had a thin voice. There was a little bed in the left-behind corner of the stage. As they are a rock band, they had no chance to put more decors on the stage. Despite lots of ballads in Eurovision, their style wouldn’t for me be enough for them to qualify to the final. They reminded me of Kaffe – Lorraine which was the debut entry of Bulgaria in 2005.

No one from the audience seemed to like their performance. Their black outfits were looking like they had had been to a funeral. They weren’t matching with the pink background. Their song wasn’t fast enough but the two dancers in background were non-stop dancing.

Tudor Turcu or should we say Fake Alice Cooper? He were dancing on the stage weirdly. Can’t be any more weird than the hats of background singers.

They had a Latin style. The singers were wearing tango dresses. The dress colours of the background singers were colour by colour which remided me the Portugese entry in 2006.

Her voice was thin and lovely. But her song was definitely not. Sadly, that “blowing” part had never come. The yellow tone of her dress was awful. And also, a blue-black background with white dots which represents stars are such a cliché!

Blue Noise was a group of 6 singers from differrent places. At the beginning of the song, the blonde girl played a violin like a guitar for a moment. And that girl was the main singer. Another five were just backing vocalists.

His voice was very beautiful. His mood on the stage was so impressive. He literally lived the song on the stage and used the background and lights correctly and well in his show. The costumes of the backing vocals who were three demons and an angel were brillant.

Favourite by favourite… Her live performance was one of the best. Even though three dancers would be good as she was like  the only one on the stage. This is because the lights were focused on her only.

The song began with a singer and four girls on table. Before the chorus only the singer was singing the song but then, another ones joıned on. Their song and their style was like they had come from seventies. No more comment.

It was looking like she had decided to follow this year’s fashion. Her song was a ballad as well. Despite standing out half-naked dancers, everyhting were cliche on the stage. Blue background, white stars and a black dress… “Ballad Starter Pack” used to assist.

Her style was like Tinkerbell. She chose a purple background at first but then it turned into different colours. Her dancers were wearing disco balls on their faces. On the other hand, the song was not good enough. Basically, the chorus and the rest was not matching well with each other.

The most favourite ones, the last ones… According to the interview before taking stage, it was a Swedish band. Their song was in between of ballad and pop. Despite the cliche background, the voice of the female vocalist was brillant and it was the ourest voice in the contest.

The show started with the National Final contestants who sang their last entry Miracle with Luminitha Angel who was the representative of Romania in Eurovision 2005. After the intro 4 jurors appeared on the stage. Trailers were screened of the contestants during the programme as ittle interviews. Despite other shows, the voting was open.

The winner of the 2004 Eurovision Song Contest Ruslana took to the stage in the voting period. She made a public mention and call out for the Ukraine on the stage. She invited people to open the lights and she mentioned that it means: peace.

With a total of 24 points Viltaj were the winners. 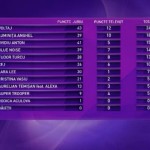 Romania at the Eurovision Song Contest

Romania debuted in 1994 with the song Dincolo De Nori and they became 21st
with 14 points. Their best result is from coming third on two occasions,  in 2005 and again in 2010. We’ve
watched Luminitha Angel the 2005 representative of Romania tonight as well.

Last year, the representatives of Romania in 2010 Paula Seling & Ovi represented their country again in Copenhagen. Their entry Miracle finished 12th in the Final with 72 points in total.