After a comprehensive song selection process for 2010, STV finally picks who will sing in Oslo. Would one of last year’s performers make it 2nd time lucky, and would it be ‘popera’, ethnic, rock or ballad flying the Slovak flag? It ended in a tied first position.

Kristína has been chosen to represent Slovakia in Oslo with the song “Horehronie”, after a tied final in Bratislava.

There was a certain party atmosphere at STV’s Mlýnska Dolina studios on Saturday night.  Not least, because at a late stage, the final had been moved from the Sunday to the Saturday. Ice hockey is a huge sport in Slovakia, and with the Winter Olympic final clashing almost exactly with the original timing, Slovak Television deemed this another event of national importance.  Still, 12 songs locked in combat is nothing to dismiss, so Saturday’s primetime on STV’s Jednotka channel was devoted to all things Eurovision.

Martin ‘Pyco’ Rausch compered proceedings again, and Martin Kontúr was ably stationed in the Green Room.  Everyone had seen the acts perform twice before, and here is the running order for the final:

After Fabrizio Faniello had got the audience going, it was time for the contest proper to start.

Kristína – Horehronie
Kristína was the hot favourite, after running away with her quarter- and semi-finals.  A touch ethnic in style, and slightly reminiscent of Ukraine’s Ruslana, this had to be in with a chance.  Would her song, about central Slovakia’s unspoilt countryside be the one?  It would certainly be the one to beat.

Free Voices – Z osnov
A Capella isn’t something we see often in Eurovision.  The Latvians used it several years ago, but this was a mixed group of young singers doo-wapping away.  They qualified 6th in their semi-final, so this was always going to be an uphill battle to win.

Robo Opatovský – Niečo máš
Robo was back after finishing 6th in the final last year.  Again, he’d composed this ballad.  It was certainly a pleasant song, and Robo felt at home on the stage.  He’d won a quarter-final, so he had the capacity to win.

Martina Schindlerová – Môžeš ísť
Last year’s finalist Martina, an alumnus of Slovakia’s Pop Idol, was after a better placing than last year.  This year was something a little more upbeat.  She only finished 5th in her semi-final, after romping away in her quarter-final.  Could she win?

Aya – Do neba volám
Aya came up with a rock ballad that seemed to suit their style.  If the Slovak public wanted something a little sophisticated with soaring, if a little repetitive lyrics, then this was the one.

Marián Bango – Ty tu ticho spíš
Visually challenged Marián had a fine voice, although this song maybe wasn’t the right choice for it.  But pleasant as it was, with a simple chorus, some hoped it would do well.  An outsider.

Tomáš Bezdeda – Na strechách domov
Tomáš was back with another decent song.  Last year’s runner-up, who would have stood a chance in Moscow, sang an excellently well-constructed song about being on the roofs of houses.  A strong verse and catchy chorus all pointed to a respectable finish.

Mista – Emotions
This song featured a rarity among tonight’s finalists – an English chorus.  This was permitted by the rules, although whether it would help the cause was anyone’s guess.  As with Kristína, Mista had won both their quarter- and semi-final.  Still it was easy on the eye.

Miro Jaroš – Bez siedmeho neba
Miro had tonight’s dark horse.  A simple song, again with a decent hook.  The gimmick, if that’s the right word, was the signing.  One of Miro’s backing group signed the whole song – he also signed part of the song too.  There were many in the assembled crowd that followed suit.  Indeed, some of us would be happy to see Miro in Oslo.

Soňa – Skús ma viesť
This rock ballad also had an outside chance, as it was another quarter-final winner.  There was a certain anthemic quality about it, with a decent riff, and would be the sort of song that would do well in Oslo.

Mayo – Tón
Long-haired Mayo sat at the piano had penned this song himself.  We had Rachmaninov-style piano work, along with spoken parts.  A simple tune, designed with a good hook never go amiss.  Plus, he was on last.

P. Remenár, Klára & Liquid Error – Figaro
This was a memorable song to close the contest. Originally it was drawn first, but due to a prior engagement, STV allowed the song to move to last in the running order.  Tenor opera, along with a younger female
voice blending in a more modern style of music.  It’s been done before,
but would this be one to watch?

After the songs had all been presented, the public had more time to register their all important text (SMS) votes.  In the meantime, we were treated to one of this years beaten finalists in Malta Claudia Faniello, who sang Samsara, her song from the Maltese final.

A little later, we had the final results.  Jury and text (SMS) voting were used 50/50 to decide the winner.  One member of each final act was summoned up on stage, and the result were given – first the televotes (converted into points 1-12), and then the all important jury votes.  In the event of a tie, the televote results would take precedence.

The final result can be seen in the screenshot below: 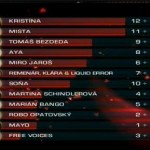