Austria is one of the countries that choses its representative song after a long selection process on the way to the Eurovision Song Contest in Baku. We finally came to an end with the final show in the selection named Wecker rockt den Song Contest. Let’s get to know the participants.

The songs can be heared by clicking on the names below (requires a media player): 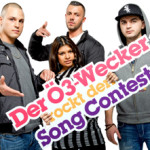 The
group 3punkt5 was previously known as Block Stars which was founded by the
member, Sido, with the other members Sharon Dragan and Marko Benjamin. Sido described the group as the ‘Key to Heaven’ and named the group Blockstars. With the addition of a female vocalist, the group changed
their name to 3punkt5 then. The group will make the open the Austrian final, Wecker rockt den Song Contest.

In the 3punkt5 (3dot5), the number "three" symbolises the three male and "dot5" the female member as the guys in the group say: "Three
boys with socially disadvantaged backgrounds, thought having a girl
would be good for not only the chance for a better life, but also for a
trip to Baku."

An Austrian girl with Indian roots, a German, a Croatian and a Bosnian will participate at the selection with an Austrian song Augenblick, that means Moment. The song also offers Austrian and Serbo-Croatian rap parts. 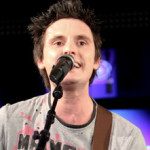 In 2006, British singer and songwriter in the selection, James Cottrial came to Vienna to study, then he fell in love with the city and decided to stay there. He is originally from Stratford on Avon which is the birth-place of the famous William Shakespeare, but he says he is influenced by James Blunt, Jack Johnson and James Mraz.

His single Unbreakable became a hit during the preliminary phase in the Wecker rockt den Song Contest. He says "I am a big fan of the idea of the Eurovision Song Contest, which celebrates the peace after two big world wars, and also it is a great honour for a songwriter who challenges with his self-written song."

The Brit James Cottrial will participate with a pop song Stand Up from the second position in the final of Wecker rockt den Song Contest. 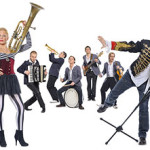 !DelaDap first joined the selection with the song Crazy Swing. Later the song had to be disqualified from the selection due to rules of participating at the Eurovision Song Contest and the group picked Don’t Turn Around for the final of Wecker rockt den Song Contest 2012 instead.

The group describes themselves as: "!Deladap means the dynamic mix of many different elements, urban and on the amount of time, rooted in centuries-old musical traditions. Our song is versed in the universal language of music! "

In this multi-national project, singers and musicians from Serbia, Austria, Bosnia and Herzegovina and Hungary came together to perform Don’t Turn Around. The song has spirits of pop, electronic music and Eastern European folklore. 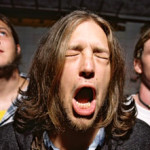 Singer and lyricist Mölgie and bass guitarist and drummer Sonti Pleshca met each other during high school and founded their school band, which also brought them closer together. They were first discovered in the North of Austria, in the Baverian area. Finally they had their first CD appropriately sent in a cabbage head to the record company in 2007!

The group describes their song and themselves as: "We have chosen the name Krautschädl for us because it freezes well, and because it is clear right away that we sing in an Austrian dialect. We all come from catfish – the old slaughterhouse, where our rehearsals is something like a second home for us. Our song is simply a beautiful song, that is sung in the Upper Austrian dialect, free from vicious violins or yodeling. "

The Krautschädl will perform Einsturzgefohr in the Austrian Wecker rockt den Song Contest to fight for the ticket for Baku. The song will be presented in rock style.

Song #5: Mary Broadcast Band – How Can You Ask Me? 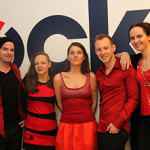 The Mary Broadcast Band is more known for their live performances as they perform live between 80 and 100 times per year. They like to sing pop, soul, blues and funk. They declare that their mission is love and their new abum concludes that they managed. Love is Completed will be released in this spring in Austria.

They describe their song as "It is a sad story between two people about love. The two protagonists in the song love each other over again. If we play the song like in a concert, this is a number that is remembered. We just find the event insanely exciting to have two sides: The music and the human side. As you learn how to know each other simply because there are many nations, and the result is a cultural exchange, we consider it now as being two months of work, great work, the fun and if we do succeed, this is a huge opportunity for us "

Their song How Can You Ask Me? will be starting as fifth and it will be performed in a slow style in the Wecker rockt den Song Contest’s final. 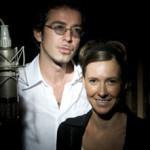 The unique Papermoon was founded just about 20 years ago and the duo released many succesfull albums since then. The group has an European sound with their songs where they mix the English, French and German languages.

They share their feelings by telling "The Eurovision Song Contest offers the opportunity of reaching a huge international audience. During the Song Contest people are looking for the best song. For us, it is a great opportunity singing in front of an international audience into the main European languages which is ​​written personal history to touch."

The multi-languaged song Vater, Father, Mon Peré will be sung in English, French and German. The song describes a feelings of a singer who grew up without a father, is from Mineapolis. The duo will be trying to take interests of the audience all over the Europe with this multi-languaged song. 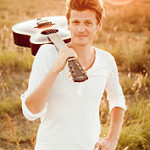 Norbert Schneider comes from a musician’s family where he got help about learning instruments violin and guitar. During his musical education, he discovered the writing and composing side of himself. In the years from 2003 to 2010, Norbert was a member of a R&B Caravan on stage and he presented classic rhythm and blues as well as his remarkable compositions with an impressive aura. With the single named Take It Easy, Norbert succeded to enter Austrian top 5 charts and later in 2011, he is rewarded with the Best Newcomer Award.

Norbert shares his opinions with us by stating: " The song Contest naturally appeals to me to appear in front of such a large audience, the party and the trappings can safely be proud too. I think I’m actually still missing there. I will show Europe how to party in Austria. "

Norbert Schneider will sing the song Medicate My Blues Away. In the song Norbert becomes a doctor across the street, the client knocks the door. It is about humourous examination of the medical profession and drug madness in music society. 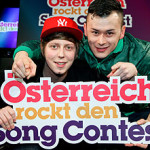 Two rap singers Luka Plochl aka G-Neila and Manuel Manix Hoffelner aka Mogen came together to create a new sound in the Austrian music.  They became famous after releasing a youTube video named ‘bam Alloa Fraunz’ and then it is followed by the videos of ‘Oida Taunz!’ and ‘Guuugarutz’. Later they became nr.1 in the charts.

The duo describe their thoughts by telling: "We are two remarkable artists – deppad to spread party, a great atmosphere! "Woki deim with Popo"! We consider ourselves the right act from Austria at the contest and we come across from authentic dialect for other countries! To win!" 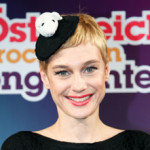 Veteran singer Sajdik Valerie was born in Vienna in 1978 but then her family moved Moscow. She turned back to the city at the age of 13. She signed her first recording contract at the age of 14 and then she joint to the group C-Bra. As his father was a diplomat and a journalist, she went to French schools in childhood and therefore her best single ‘Tous Les Jours’ was in French language. In 2006, Valerie split from the group and later in 2007 she released her first solo single ‘Picnic‘.

Valerie says: "I sing, I collect the stories from lyrics and melodies since i speak. I like to share my feelings and my thoughts with the audience on stage. I am entering to the contest for fun as i have a good song. Because I think it is the platform to show the quality of Austria’s total – from the perspective of music, culture, economy."

Valeri will sing a French song called Comme ça at the final of Wecker rockt den Song Contest. This modern, groovy song will try to follow the chances in the contest. 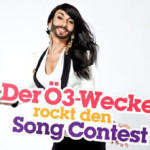 The Tom Neuwirth aka Conchita Wurst became famous after receiving a second place in the third edition of Star Mania. Then she got impressed by last year’s Austrian representative Nadine Beiler and decided to join to the Austrian selections. She is well taken care with an interesting visual appearance – a female with a beard. In the selections, Conchita Wurst became a fan favourite after having a performance on singing Unbreakable.

Conchita Wurst shares her opinions with us by stating: "The song contest is a magical event for me – especially since Celine Dion in 1988, the year in which I am in the Colombian highlands, hatched from the egg. I think it’s just nice to represent so many different nations as their country through music and I want give my message there "live tolerance and acceptance" to Europe."

We will close the Wecker rockt den Song Contest with the last act coming from Conchita Wurst. The song That’s What I Am is faster than fan favourite Unbreakable which still has drama inside. In the song, Conchita Wurst sends a message, ‘You must not be everybody’s darling, as long as one is at peace with itself.’