Vitaly Sedyuk also known as Eurovision’s Naked Butt Guy is proud of his butt flashing stunt during this year’s Eurovision Grand Final. He was arrested, faced five years in prison, but he ended up being the one who could laugh. 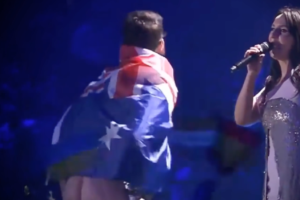 The famous Ukrainian prankster Vitaly Sedyuk has been in court following his arrest on Saturday evening. He flashed his bare bottom when he stage bombed Jamala at the Eurovision Grand Final during her interval performance. In line with Ukrainian law, Sedyuk could have received anything from a fine to a five year prison sentence, but he ended up with just having to surrender his passport and report to the police, if he changes residence. If he does not live up this – his sentence could be changed.

Speaking following his arrest the prankster suggested the act was not premeditated “I have nothing against Jamala. The singer is one of the few who spoke on a small stage, I was just nearby”.

He also confessed during a hearing that he was able to gain access to the venue without a ticket or accreditation pass. However, given the high level of security at the event, this claim seems rather unlikely. Sedyuk boasted “I used it already did in 2014 in Los Angeles, where no ticket and no accreditation I went inside and I even managed to get on stage. This time I managed to do the same. Here I also came without invitation, without accreditation and could reach the scene. And in America, I just went on stage, but this time I wanted to do something that would be remembered. I am proud of that”. If it is the international actions from Vitaly Sedyuk which made the Ukranians just sentence him to surrender his passport, is unknown.

See alsoWhere have you heard Ruslana's Eurovision interval act before?

In 2010 Jimmy Jump interfered the Spanish Eurovision act as he went on stage during Daniel Diges’ performance. He was sentenced a fine of 2000 euros.

After this two events, many have criticised the level of security blaming them. However security has never been higher than it was this year. And if you want a TV show with fans right next to the stage, then this is the risk you take. Security can check if people are carrying weapon etc, but they can’t check if people have the intention to climb the stage.