Tonight, in Armenia 12 acts fought for the honour of representing their country at this year’s Eurovision Song Contest. The target for the winner is clear: First bring the country back into the final, and second, try to secure their first victory.

Armenian broadcaster AMPTV received a total of 53 songs for their Depi Evratesil selection. A jury panel brought the number down to the 12 who competed in tonight’s final. A combination of jury and televoting decided the result and thereby who will be representing Armenia at this year’s Eurovision Song Contest.

The show opened with what almost seems mandatory for any national final; a medley of the country’s own recent songs and a reminder of who won last year. Followed by some altered rendition of Te Deum. Armenia went with a short yet interesting dance version of the Eurovision opening music. After the artist presentation, hosts explained this evening’s proceedings and reminded the audience what’s at stake: A participation at the 2020 Eurovision Song Contest in Rotterdam, The Netherlands.

Based on the postcard introduction of Agop, I expected a solid dance banger. Shortly into the song we were indeed treated to some dance tunes, but neither the song or his voice is solid. He does seem to enjoy himself on stage, joining his dancers for a bit of folk dancing, so he has that working for him. And I have always liked butterflies.

Karina is introduced with some classic dance moves, and a Skunk Anansie hairdo. This introduction seems to have very little to do with the song, which does sound a lot more more like a solid dance track than Butterflies. Her tiger-print, one winged suit-pants wardrobe is hard to explain.

While I find the song a lot stronger, her voice doesn’t live up to what I’d like to expect from a national final.

Hayk Music – What Is To Be In Love

Hayk’s smooth voice and senstive ballad about the meaning of love stands in strong contrast to the previous two contenders. And I mean that in the most positive sense possible. A bit of jazz, a bit of Motown sound, I love it – and so did the audience.

First we see bubbles being blown onto the stage. Then we hear Erna’s smooth voice backed by a modern jazz sound. This song pops as much as Erna’s bright red hair, bright yellow shirt and indeed the bubbles accompanying her on stage all through the performance.

Jazz seems to play a large part in tonight’s show. No Love too experiments with giving a new twist to this old genre. Whenever Eva sets her jazz voice on, we hear mostly dance music. When she sets her dance voice on, the music sounds more jazzy. It’s an intriguing song I’ll give her that, but other than that – I don’t know what to think.

Athena Manoukian – Chains On You

I wasn’t aware that position for Queen of Pop was open, but Athena definitely both knew, and aims to fill that position. She even brought her very own royal chair on stage with her, and has servants performing her dance moves. This very modern pop song certainly stands out tonight. How this might one day come across on a Eurovision Song Contest stage is hard to judge. The stage and general setting is so much smaller than what we’ll see in Ahoy.

A big musical anthem meets You Can Leave Your Hat On, and then merges into a simple happy go lucky pop song from two decades ago. This song really has everything, as if Gabriel told every Armenian songwriter it was their turn to add something to the song.

Unfortunately, this potpourri of music styles doesn’t work for me. It adds to the general enjoyment of the show though.

Sergey opens this very powerful rock anthem, and carries almost all the way. Only towards the end, we hear Nickolay join in like a well respected grand old man. But not before we see him mime along to a large portion of the lyrics.

Back to a subgenre of jazz, because, well, that does seem to be the general theme this evening. This time more moving towards some soft pop influences. Miriam opens all registers her voice seems to be able to carry, and delivers a perfect performance.

Oh, and she wears a stunning red dress.

Vladimir keeps asking what’s going on, and so do I. I’m having a tough time defining the sound, his red beanie, the living room setting and least of all do I understand what that one boxing glove is doing there on stage under the table.

And if all of that sounded too negative, don’t be fooled – I liked it. I just really can’t define it.

With a song title like this you have something to live up to. So many great songs called Heaven have made it into the charts called. In my opinion, this song won’t follow them though. The mysterious, folklore sounding music seems to be a bit all over the place. Arthur’s own voice hardly ever stands out over the music.

The backing vocals do seem to save the performance and steal the show.

A mere 53 minutes after the show started, and we’re already at tonight’s last contestant. He seems to have gotten quite some inspiration from Swedish Robin Bengtsson’s 2017 Eurovision performance. Dance moves as well as the sound, for just about half of the song.

And for some reason, there’s a progress bar counting down to 0% human shown on the screens behind him. Even though the text changed to “Mission complete”, I don’t think he was quite saved.

During the voting window, we see some short interviews with tonight’s contestant and Armenia’s 2019 Junior Eurovision Song Contest contestant Karina Ignatyan performs her song; Colours Of Your Dream. And of course the usual few recaps of all the songs. After the voting window closed, we’re treated to a rather long montage showing the artist preparing for their performance.

Armenia’s most recent top 10 position was delivered to them by Iveta Mukuchyan with her song LoveWave. Before we get to the results, we get to hear what she’s been up to lately before ever so subtly merging over to an update rendition of her 2016 Eurovision song.

Icing on the cake is en ensemble performance of the most recent Eurovision winning song, Arcade, featuring all of tonight’s contestants. While these kinds of experiments rarely work, it really did tonight. Shout out to the producers for putting this together just right, making each of the artists shine where they are best.

Results from several voting groups were read out, in running order. Especially not knowing how many points were at stake, this was a very exciting proceeding. Athena Manoukian took the lead from the first 60 points she receive, and this lead only got stronger for every time it was her turn to receive points.

All the way to her victory! 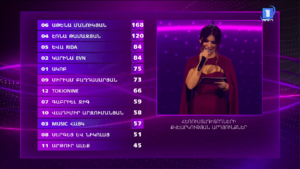 Back in 2006, Armenia joined the Eurovision Song Contest – and in the beginning, they were quite succesful. Their first five entries all reached the final – and finished in top 10. They achieved results many countries were envy at – and it looked to just be a matter of a short time before they nailed the victory too.

It wasn’t until Emmy’s Boom Boom in 2011, the country missed the qualification. Emmy finished 12th in her semi-final despite quite a catchy song. The following year, Armenia didn’t take part, and in 2013, Dorians finished in 18th place, but at least they were in the final. In the years that followed, Armenia remained the high succesrate we saw in the beginning. They reached the final again every year… until 2018… and in 2019 also. A bad circle has started – and pressure will be on to sucure at least a place in the final of this year’s Eurovision Song Contest.

Twice has Armenia finished 4th – and that is their best result to date. The first 4th place were achieved in 2008 with Qélé Qélé, performed by Sirusho. In 2014, Aram Mp3 repeated the 4th place with the song Not Alone.

Despite bot being succesful, Boom Boom from 2011 is worth a little nostalgic reminder of in the embedded video below: