Key positions regarding pitch concept and stage design have been revealed. A world famous stage designer has been assigned the task of creating the stage for the upcoming Eurovision Song Contest 2017 in Kyiv. The announcement of Florian Wieder heading up the project also comes along with news on the official tour operator and the creative concept pitch.

Preparations for the Eurovision Song Contest are certainly gaining momentum. This morning many announcements have been made from the NTU this morning which include the stage designer, the official tour operator and the creative concept.

3 time Eurovision stage designer Florian Wieder will be leading the project for the stage design of next years contest. Florian has provided the design for the stage in 2011, 2012 and 2015 (Dusseldorf, Baku and Vienna). As well as experience with Eurovision, Weider has also worked with The X Factor UK/US as well as the MTV music awards and America’s Got Talent.

In a comment made on the NTU official website, Wieder said “My goal is to bring happiness and excitement for everyone involved. I’ve planned to incorporate some entirely new features which I will be kept as a surprise until the show. The design for 2017 will be unique and divergent to the previous shows. ESC is not only a passion project for me, but also a creative challenge, one that is immensely inspiring for me as a designer”.

The stage design will not be released to the public until February.

In another announcement this morning, the NTU have also revealed the creative concept who will be responsible for developing the theme, slogan and logo for next year’s contest.

Ukrainian agencies Republique and Banda Agency have come together and named themselves Re Design Team. This is the name that they will use for this project solely. Republique and Banda Agency were selected from 11 other creative agencies based in Ukraine. In a statement made on the NTU official website, Victoria Romanova expressed why it was important that a Ukrainian agency was sourced. “It should be noted that the pitch was deliberately held among Ukrainian companies or Ukrainian offices of international agencies. We did not involve any global companies based outside Ukraine. It was crucial for us to invite Ukrainian professionals to participate in this pitch in order to show the world the best national design and idea as a result”

The theme, slogan and logo is expected to be revealed to the public in January 2017. 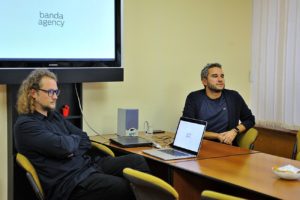 Banda Agency who are collaborating with Republique

The NTU have this morning announced the name of the official tour operator of the Eurovision Song Contest 2017. The company selected is called Pilot.

In the criteria for selection the selected tour operator must have an online service which lets visitors book hotels easily via an online portal. Pilot will provide these services to official delegations, the press, members of the European Broadcasting Union (EBU), sponsors and partners of the show. Pilot will also provide services to Eurovision fans who will arrive in May 2017 to the capital of Ukraine. Other services that Pilot offer on their website are flight tickets, excursions and railway tickets. This will be extremely useful for fans who want to extend their trips to Ukraine and visit other interesting cities and areas such as L’viv and the Carpathian Mountain region.

The Eurovision Song Contest will take place on the 9th, 11th and 13th May at the International Exhibition Centre in Kyiv, Ukraine.

Jamala won the contest in Stockholm earlier this year with her song 1944. You can see why Ukraine will be hosting next year’s contest by watching Jamala’s performance below.