After two semi-finals and one national final, the Slovenian selection EMA has its winner. Indeed, it will be Omar Naber with the song On My Way for Slovenia at the Eurovision Song Contest 2017.

Eight acts fought tonight at the Grand Final of EMA 2017. Among the eight artists, some are familiar to EMA and Eurovision.

The staging remained the same. It was better this time with improved vocals from the male singer. The song was still enjoyable to hear and it was a good way to start the show .

Last time, she performed last in her semi-final. Tonight, she was second in the running order and the pressure was there because of her vocals, which were a bit off at the beginning. Throughout the song, only the chorus sounded good.

The staging used the same technology as that in the semi-final, which means one reminiscent of those used by Måns and Sergey Lazarev recently. The vocals were weaker than in the semi final.

This was one of the favorites tonight. The backing vocalist of Tinkara Kovac delivered a better performance compared to the semi-final. This is particularly true of the chorus, which was a bit off in the semi-final.

The quality of the song was very strong due to the powerful vocals of the female singer. But, it is a song a bit dated for this year; it sounded like a song from the 90’s because of the chorus.

Omar Naber – On My Way

After a powerful rock song, a peaceful ballad by Omar with a very good vocal quality. It is not as common to have male ballads and this one was very well done and seemed like heaven compared to the rock song that came before.

The duo of brothers was back again. The vocals seemed a bit better than in the semi-finals. As with Nika Zorjan, the song is written by Maraaya and is of good quality. It is a mix of ballad and pop sound.

The beginning was spot on compared to the semi-final, when she had a mic issue. But, tonight, it was much better, with a very good staging and a good mystical atmosphere.

The hosts of the show tonight were the same as in the semi-finals, Maja Martina Merljak, Tina Gorenjak and Tanja Kocman. Mario Galunic explained how to vote and presented the participants at the beginning.

In this final, special guests performed on stage. They were Jamala, winner of Eurovision 2016, ManuElla, winner of EMA 2016 and Toni Centiski, the Croatian representative in 1994.

Manuella performed one of her songs, Salvation. After a second recap, the representative of Croatia in 1996 sang his Eurovision entry of the same year and another song called Lako Noc. The interval act continued with Jamala performing her winning song 1944.

These are the results of the Grand Final of EMA 2017. 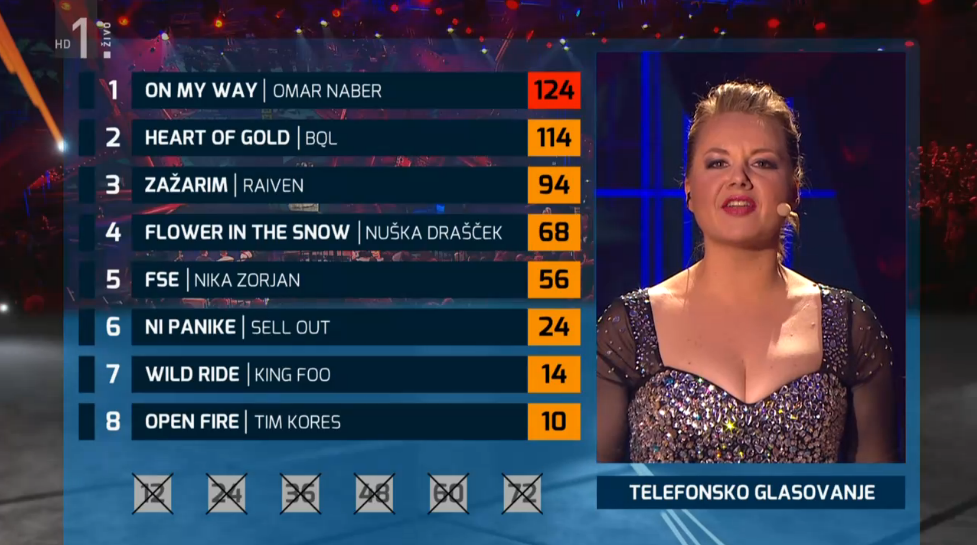 The country participated for the first time in 1993. In the pre-qualifying round that year, they finished first. In the final of 1993, they ended up in the 22nd place.

Yet, Slovenia has never won the contest and has struggled to get good rankings. For instance, the country managed to be in the top 10 three times since their debut. The most recent one was in 2001 with the song Energy performed by Nusa Derenda.

Last year, Slovenia selected ManuElla and her song Blue And Red to represent it in Stockholm. She performed in the Second Semi-Final and did not qualify for the Final. She placed 14th with 57 points.

Below you can listen to Omar’s entry On My Way.