To the common viewer, the running order is nothing more than the order in which each country performs their entry. However, to a Eurovision fan, it is something more. So does the running order influence the results? I’ll be focusing on the contest since 2004 for two reasons. Firstly, because, in that particular year, a new era began for the contest with the introduction of the format still used today. Secondly, because, since 2004, the system of the semi finals was introduced to the contest.

Let’s begin with a look at the winners of the last eleven years. Since Wild Dances won back in 2004 from tenth position, every subsequent winner has been one of the last ten songs to be performed in the final. That stopped last year when Conchita won from the 11th place. Does this suggest that, to be glorious and win the Eurovision Song Contest, a late draw is necessary? Or could it be argued that the last winners would have won regardless of their draw? The only song to have really convinced me that it would have won from any position in the running order (even from the 2nd) was Fairytale. I believe that whenever Alexander and his violin took to the stage, the result would have been the same although, perhaps, not the landmark victory he achieved. Of course, some may say that the most popular song will always going to win no matter what place it is allocated in the running order. Hypothetically speaking, had My Number One, Molitva and Running Scared – all of whom won by less than a 40 point margin – been performed, say, first or second in the final, would they still have won? I think maybe not. 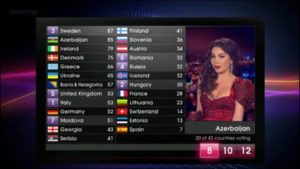 The scoreboard in 2012 Contest

Looking at the semi finals allows some extra analysis on this topic as we can compare the results of songs that were performed earlier/later than they were in the final. Something interesting is that Wild Dances, Believe and Running Scared all have one thing in common – they are all songs that won the Eurovision Song Contest but did not actually win the semi final they had to qualify from. Even more interesting is the fact that they were all defeated in the semi final by a song that came later in the running order; I have to say here that they went on to win the contest in the final, and what is strange is the fact that they performed from a later place than the songs they had been previously defeated by in the semi final!

While this could be a coincidence, the fact that this is the case with all three occurrences suggests that a later draw does influence the winner of the final. These are only some of the examples that we can mention. Of course, when you expand further and take into account every other position of the last eleven years, a later draw does not necessarily guarantee a high placing. In 2009 for example, Finland and Spain performed 24th and 25th and then ended up finishing 25th and 24th respectively. 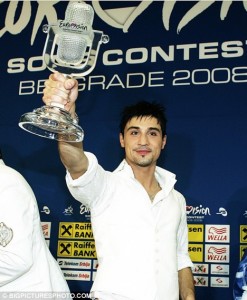 Dima Bilan with the trophy in 2008

Obviously, the running order doesn’t affect every single song otherwise we’d have the same, or very similar results, each year. True Eurovision fans will continue arguing over this issue, saying that, if the draw had been better, things might be better for this or for that song… We have to wait one more day to see if a song from the second half of the show will win again the contest (that would be the 10th time in 12 years) or if, for a second year in a row, a song from the first half will take the trophy.