Tonight, Iceland will play against France in the quarter-final at Euro 2016. The small island nation has been the biggest surprise this year, and the goal keeper Hannes Halldórsson is a big part of their success. Looking at his CV you however don’t just find football, but also Eurovision.

Iceland is with its only 320.000 inhabitants the smallest country to ever have qualified for the Euro 2016, and them to have reached the quarter-final, and as such be among the eight best teams in Europe, is somewhat of a sensation. Based on team work, fighter spirit and a strong believe in doing the impossible – they have been doing basically that, the impossible. One of the players worth mentioning for an excellent performance is the goal keeper Hannes Halldórsson. UEFA’s official statistics shows that he is currently the goal keeper with most saves in the tournament. 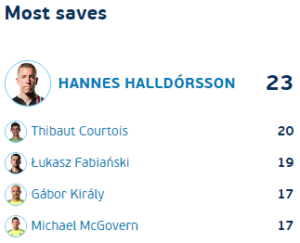 Hannes Halldórsson, 32 years old, is not just a great goal keeper, but also a film director. In this career we find a Eurovision connection as he directed the video for the 2012 Icelandic Eurovision entry Never Forget performed by Greta Salóme & Jónsi.

Though not mentioning Hannes specifically, Greta, who also participated for Iceland this year, has been supporting the Icelandic football team via her Facebook page where she posted a video earlier in the tournament and as the team recently knocked out England she wrote it about on Twitter.

Currently Hannes is on contract with Dutch team N.E.C, but plays at Norwegian FK Bodø/Glimt on a loan. He debuted at the Icelandic national team in 2011.

About combining football and film making he told to FIFA in November 2014 that he until 2013 worked as a film maker from eight in the morning to four in the afternoon and then devoted his evenings to football. Football is now taking more of his time, but the door to the film word is still open:

My weekends were obviously taken up with matches and the little free time I had available to me. I’d take my computer with me to away games so I could edit my films. It was all a bit exhausting but it was exciting too. All the same, I’m relieved that my life is not as hectic now and I’m pleased that I’ve chosen football. My employers backed my decision and they told me that the door will be open for me whenever I want to go back to directing.

See alsoYohanna in a cover of Denmark's 1993 Eurovision entry

When Iceland tonight play against France in the quarter-final of Euro 2016, it is with no loses so far in the tournament where they played 1-1 against Portugal, 1-1 against Hungary, a 2-1 victory over Austria and finally they beat England 2-1.

Below you can take a look at the official video for the Icelandic 2012 entry – directed by Hannes Halldórsson: