The day after the first semi-final the Eurovision Song Contest is officially hit by a couple of scandals. Head jury, Filipp Kirkorov, is seeing the Norwegian participant privately and Toppers are threatening to boycott the final should they qualify – EuroVisionary explains what is actually going on!

Ever since Filipp Kirkorov turned up to meet Alexander Rybak, Norway’s Belarusian born participant, shortly before his first press conference there has been talk about whether or not we can count on Filipp to be 100% independent. All jury members have officially signed a contract where they declare themselves to vote independent from any of the participants. Pictures from a meeting in Filipp Kirkorov’s apartment, Sunday before the official opening party, between him and Alexander Rybak are now flooding around on the internet. With the Norwegian participant having confirmed the meeting there seems little doubt that it did actually take place at that time. 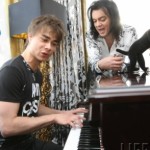 EBU’s manager Communications & Public Relations Sietse Bakker said to EuroVisionary that he has seen a picture, but obviously don’t know when that was taken – and even if it was taken Sunday afternoon no rules has been broken. He points out that each jury member signed that declaration to vote independently and that there are nothing in the rules that forbids a private meeting as that can’t be checked. Sietse added: “Should the 12 points from that jury go to Norway and the public knows that they have met Filipp Kirkorov will have some things to explain though."


The rules states that "None of the jury members must be connected with any of the participating songs/artists in such a way that they cannot vote independently.". What the word "connected" means there is no definition of, and that is probably the whole problem here. No one knows if "connected" cover over the word friends.

Another scandal building up comes from the Dutch participants, Toppers, who have spoken out laud about boycotting the final should they qualify. This comes up as a gay parade planned for Saturday afternoon here in Moscow has been forbidden. Moscow’s mayor has said that a gay parade has never – and will never take place in Moscow. The homosexual organisations are however planning to go through with the parade, allowed or not, and is hoping for support among the foreigners visiting the city in relation to the Eurovision Song Contest. In a country like Russia such things  has before resulted in the police using force to stop the illegal demonstrations and should the same thing happen with the demonstration on Saturday the final might very well be without the Netherlands should the country have qualified. Toppers are saying that should the demonstration end in any form of violence they will not go on stage that evening.