After weeks of selection heats, the host country Ukraine chose O.Torvald as its representative for the Eurovision Song Contest 2017 in Kyiv. The decision comes after Ukraine held its national final this evening. O.Torvald was one of the six finalists to compete for the ticket to this year’s contest.

The final six acts fought for chance to represent Ukraine on home ground this May.

This is a reggae-style band of three members that focuses on conveying world peace through their music to their listener. ‘Discovery of the day,’ according to one of the judges, Andriy Danylko.

The performance was undistinguished in the beginning. The song was performed in the best reggae tradition with nice vocals and had a message to a mother. A minute in, it started developing with vinyl records spinning in the background. A Swedish 77-year-old so-called Crazy Lady was invited on the stage from the audience and demonstrated breakdancing throughout the rest of the performance.  It shocked the juries and arouse interest as to how this all came about.

Although, Salto Nazad had very little chance to win the ticket to Kyiv, overall, it was a quite fresh start to the show and was favored by the juries.

Ambitious and young artist who won the X-Factor Ukraine. Certainly, one of the most promising and anticipated performances of the night. With a remarkable lens in the left eye, Melovin appeared alone on stage in an all black cloak outfit. The entry could be described as a modern electro-pop song with a catchy hook telling us about the artist’s world questioning. Images of Melovin’s face started emerging on the backdrop, then quickly disappeared. Towards the end of the performance, the stage lit up with coloured visuals.

The juries had a split opinion on the performance, with Meladze unhappy with it, pointing out the artist’s weak vocals, as opposed to Danylko and Jamala’s words of praise and support.

Not something Ukraine has ever done in Eurovision, a rock band of five members is certainly a standout of the show.

The band appeared on steep cliff platforms in white ripped cloth outfits with a timebomb-like countdown attached to them. It’s a powerful and energetic rock entry, chanting ‘time can do miracles’. Towards the end of the performance, fire erupted in the back, with the countdown turning green as it was close to reaching the end.

Jamala praised its production, while Meladze favoured the band’s emotion. Danylko, however, was skeptical about its potential, but ended up favouring it.

Illaria – Thank You For My Way

Folk-styled singer who would continue the chain of ethnic sounding entries, matching Jamala’s 1944.

Illaria appeared in a beige fluffy dress, fluttering to the sides. The song talked about a love story between two people with Illaria praising her loved one for raising confidence in her. The performance included sparks forming a tree in the backdrop. The song had an ehtho-pop feel with a mellow, fairytale-like sound.

The performance was favoured by all jury member,s praising Illaria’s stage emotion, soul and vocals.

Tayanna – I Love You

Performance preparations took Tayanna some extra time as she did not appear on stage at the very beginning of the show along with the other contestants.  Another highlight of tonight’s show, Tayanna’s entry has been one of the fan favourites of the Ukrainian national final.

Tayanna, yet again, appeared on stage in an elegant outfit. She wore a red cloak covering a silver and shiny dress that was quite different from her semi-final outfit. The song is a powerful ballad with a modern production and a strong love message. The performance reached its climax towards the end, with the backdrop bursting into sparks forming a heart.

The performance was favoured by the jury members for its power and boldness.

Described by his colleagues as an independent and alternative artist, Rozhden wrapped up the Ukrainian national final line-up this evening.

He appeared in a simple black and white suit, channeling positivity and smiles. The performance had a charismatic vibe and the song had a funk style. Visually, it was a let down from the rest of the contestants as the performance was all about the song.

In comparison with Rozhden’s semi-final performance, the jury noted his vocal improvement and the cheerful mood of the performance.

The winner of the national final was chosen by a 50/50 voting system. Half of the votes were given by the general public and the other half by the expert jury.

The expert jury consisted of composer and producer Konstantin Meladze, current Eurovision winner Jamala and Andriy Danylko, who represented the country in Eurovision 2007 under his stage persona Verka Serduchka.

The show began with Jamala’s performance of Zamanili. The performance included Jamala’s tribal dance during which she was dressed in a fully covering cloth with coloured tambourines attached to it.

The results of the Ukrainian national final were as follows:

Since Tayanna and O.Torvald both scored 10 points overall, O.Torvald was chosen as the Ukrainian representative due to getting more televoting points. 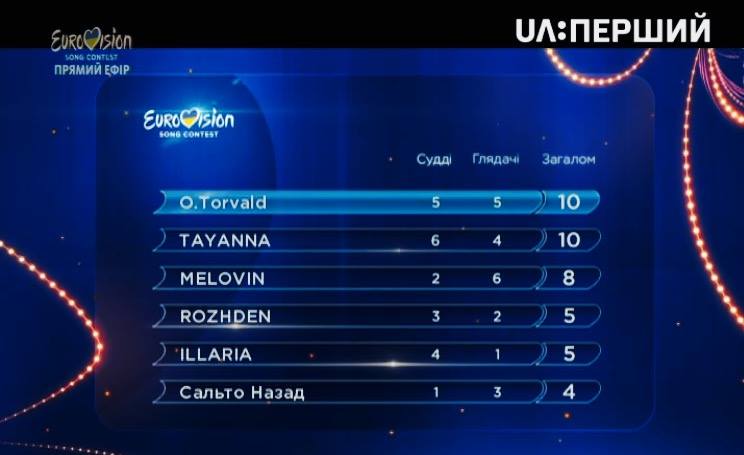 The results table of tonight’s final.

Ukraine at the Eurovision Song Contest

Since making its debut in 2003, Ukraine has had an excellent reputation at Eurovision. It has never failed to qualify for the Grand Final and has had a total of nine top 10 placements. Six of these have been in the top 5.

Ukraine has won the contest twice. Ruslana was the first artist to bring the Eurovision crown to Ukraine in 2004 with her song Wild Dances. Jamala won the contest with 1944 last year, when the competition was in Stockholm. Jamala came second in both the jury and the public vote, but came in first place overall. As a result, this year’s contest is taking place in Kyiv, Ukraine.

You can watch O.Torvald’s performance of Time in the following video.