After Tuesday’s draw for the running order the two semi-finals are almost planned in details. EuroVisionary has been informed about when we can expect advert breaks and re-caps. This can add even more information to the ones who wants to speculate on influence of the starting positions.

The two semi-finals of the 2010 Eurovision Song Contest will take place on Tuesday the 25th and Thursday the 27th. Ten songs from each semi-final will qualify for the final where they will be joined by the five automatically qualified songs; the big4 countries Spain, France, Germany and United Kingdom plus host country Norway.

For the two semi-finals there will be an advert break between song number 12 and song number 13. This is done to give space for own adverts for those broadcasters showing adverts in programs. For the ones not showing adverts this time is usually used for showing some kind of preparation of the show. In the first semi-final this means adverts between Albania and Greece while it for the second one comes between Ireland and Bulgaria.

Besides a re-cap of all participating songs after the last performance EBU confirms to EuroVisionary that there will be smaller re-caps taking place after the 5th song, the 10th and the 15th. Sietse Bakker, Manager Communications & Public Relations, EBU however adds that these are just preliminary plans at the moment and that things can still change.

The running order for the two semi-finals can be seen in the images below: 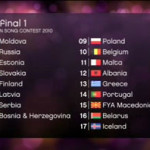 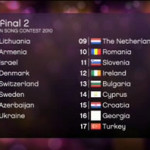