The first surprise came out from Serbian radio and television broadcaster, RTS, announcing very well-known Željko Joksimović will be representing this country at the 2012 Eurovision Song Contest. After that Željko, who is a Eurovision-hero in his country, saw anticipation rise all over Europe, hoping for another great composition.

This well-known name has already appeared on the stage of Eurovision Song Contest more than once, representing Serbia & Montenegro in 2004 İstanbul with the song Lane Moje, finishing with 2nd placing. In the year 2008, he was one of the hosts at the contest which was held in Belgrade. Meanwhile, his compositions also participated in the Serbian national final in 2005, also in Eurovision Song Contest in 2006 and 2008.

Željko topped the betting list even without a song till this evening which is showing how the hopes are high. "Maybe I am coming back again as I feel deeply inside that I did not finish what I truly want. The Eurovision Song Contest gave me a lot and I believe that I will give something back to it as well." he said before the show and he describes his representative song "The song is definitely powerful, in a Eurovision sense of that word, but it is hard for me to describe as I am still enjoying in it. Till this moment most of my time is spent in the studio working on the song, preparing it".

Tonight’s show was expected to start at 21.00 CET but some technical problems caused delays. The show lasted around an hour and a half. The show was broadcast live by the national broadcaster RTS’ first channel RTS 1 via internet and satellite. The stream was also available on the official page of the contest, eurovision.tv.
The show was more likely a mini concert though it could be considered as a song presentation. The special guests were 2008 Serbian representive Jelena Tomasevic and Bora Dugic, also 2006 Bosnia & Herzegovina representative Hari Mata Hari. The common side of the both names is participating with songs written by Željko Joksimović. Meanwhile RTS Symphony Orchestra consisting of 40 musicians played in the mini concert. 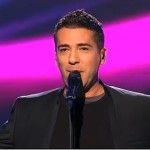 Željko opened the show by singing both of his Eurovision Song Contest composisions, Lejla (Bosnia & Herzegovina 2006) and Lane Moje (Serbia & Montenegro 2004). Then our host Tamara Aleksic had a quick interview with him, showing the video clips of Ljubav Nije Stvar at the developement stage.

Later in the show Željko continued his concert with some of  his other greatest hits such as, Dvejko. Most of them were pure ballads with a modern sound. Then the show continued with the performances of guests singing Željko Joksimovic compositions. Therefore Hari Mata Hari performed Lejla which brought him the third placing at 2006 Eurovision Song Contest and Jelena Tomasevic performed Jutro from the Serbian selection in 2005. Bora Dugic and other guests performed Željko songs. In each performance, Željko played different instruments, showing us how great musician he is.

At the end of the concert, it was time to announce representative song. The team of Željko was presented to the public with the special interval act video. The Serbian participating song will be Synonym. The song is typical Željko, starting with violins. It is a pure ballad with modern melodies, which reminds of the movie Braveheart soundtrack with its intro.

After the first performance of the Serbian entry, Željko sang it once again, but this time, it was the Serbian version, Ljubav Nije Stvar. It is still yet to be decided which version will be sang at the 2012 Eurovision Song Contest in Baku.
Serbia will be participating in the first half of second semi-final at the 2012 Eurovision Song Contest on May, 24th.

Below you can hear both versions of the song.