Day 1 of this year’s Eurovision and it’s time for some of the countries competing in the first semi final to take to the stage for their first rehearsal. Reflecting the running order of the show, Moldova, Armenia, Belgium and The Netherlands will be the first to rehearse their entries. Reporting from the press centre in Wiener Stadthalle, Eurovisionary will be updating this article with information as each country completes their rehearsal.

Day 1 of the first week of rehearsals opens with 22 year old Ukrainian Eduard Romanyuta who is representing Moldova in this year’s Eurovision Song Contest. Romanyuta is an experienced performer as he has been on stage since the tender age of four. The press centre is eagerly anticipating this first performance of the day and Eduard stage rehearsing I Want Your Love, a pop number that boasts a team of international writers and was produced by Swedish music publisher The Kennel. 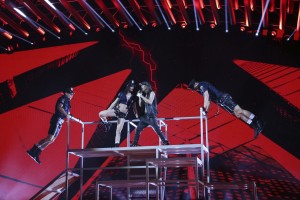 There is a half hour delay before the Moldovan rehearsal is shown on the monitors. The presentation starts with Eduard and his dancers, two men and a girl all dressed in skimpy police outfits, on a raised platform. The stage is predominantly lit in red to start with and looks quite pretty on screen. Eduard’s styling is very similar to that in the Moldovan national final – he still has his hat over his long hair. The presentation and choreography appear intentionally sexy. Not only just because of the dancers being in leather shorts but also due to the suggestive choreograpy. There are particular close ups on the female dancer’s body who, suprise surprise, about three quarters into the song rips Eduard’s top giving him the opportunity to show off his toned torso. Eduard appears to be quite agile indeed as, at some point, he performs a sommersault. It is difficult to tell what Eduard’s vocal performance is like though as the sound volume inside the press centre is quite low but one of his ‘go’ screams sounded a bit croaky. This is a fun, sexy presentation that, due to these very facts, will delight some and alienate others. It seems that Moldova is going for the viewer rather than the jury vote. It transpires that we are only going to get the very last run of Moldova’s rehearsal shown inside the press centre.

Armenia, represented by vocal group Genealogy, is second to rehearse today. Genealogy is in fact the result of a project by the Armenian state television who decided to put together a group consisting of well-known and less-known singers of Armenian descent – one of them being Inga Arshakyan (Armenia 2009) – from across the world; the broadcaster’s intention was to highlight one of the song’s core threads – genealogical continuity. The reason why the Armenian television went to all this trouble is the fact that 2015 marks the 100th anniversary of a well-known, truly traumatic episode in their history; this proved controversial with a couple of countries who hold different views on the event and as a result the original title of the song, Don’t Deny, had to change. It is therefore interesting to see how the Armenian delegation will stage Face The Shadow, a song officially described as ‘a powerful anthem about peace, unity, and love.’ 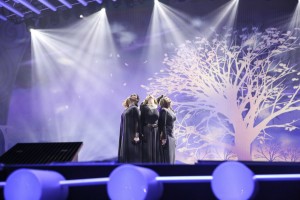 Purple and blue are the colours of the Armenian presentation. The initial stage backdrop shows trees silhouetted against hues of purple and blue and making a reference to family trees as well as concentric round geometric patterns rotating on the stage floor, The first shot shows one of the male singers surrounded by the rest of the group. There is a close up of him before the rest of the group are shown again positioned across the stage. The girls are in similar long, dark frocks and wear folk jewellery on their arms, around their waists and as head dresses. The boys are in dark suits, one of them in a jacket that at first appears sleeveless until one realises that the sleeves are stitched on but the singer’s arms come out under them. Some faces look more tense than others during the first run. There are some uncertain looks as well as uncertain notes here and there and it looks as if the choreography has not been brought up to scratch yet. The singers move on stage to meet each other in twos and threes and there is a panoramic shot of them forming a close circle and looking up to the camera against the revolving geometric patterns – when this has been polished a bit more, it will make a very effective feature of the presentation as it matches the dramatic change in the music. There is also a world map in purple projected on the stage floor. The presentation finishes with a bushy white tree shown in the background and, during the last run, this is combined with pyrotechnics.

It is now time for another change of musical style as Belgian entrant Loïc Nottet is about to take to the stage. The country’s entries have been somewhat hit and miss in the past but no one can accuse Belgium of shying away from experimentation. This year is no exception as Rhythm Inside is a distinctive hip hop number which is, roughly speaking, about getting attuned to a cosmic rhythm of love. Despite not having written the song’s lyrics himself, the young Belgian artist composed the song and has had considerable input into its musical production, choreography and overall artistic direction. It is therefore reasonable to assume that Loïc also had a say in what we are about to see during Belgium’s rehearsal in a few moments’ time. 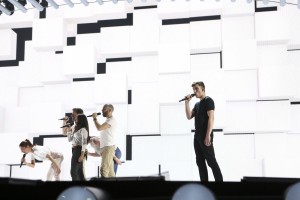 Belgium is brightly lit in white with occasional geometric details – mostly black lines – projected in the background and onto the stage floor. Loïc, dressed in black and wearing a long coat, is joined by two male and three female backing singers who prove to be a major part of the choreography. Loïc is on the right side of the stage and the backing singers on the left to start with. Loïc looks a bit apprehensive on stage but he manages to keep his cool overall and his confidence builds after the first couple of runs. He meets his backing singers mid-stage and then something a bit odd happens: Loïc lays down on the floor and one of the male backing singers steps on him. The choreography otherwise consists of jerky moves that follow the song’s beat to good effect. There is a cute point during the first run when, during the presentation’s finale, it is the young backing singers who are laying with their backs on the floor this time but Loïc forgets the choreography – he is supposed to be standing next to them – and apologizes with a ‘sorry, I forgot’ that gets him a huge applause in the press centre. In subsequent runs, the coat, as well as the sound, are off and it is quite difficult to tell what the young singer’s vocal performance is like but this had been satisfactory during the first run. The sound is back for the last run of the song and Loïc sounds spot on vocally this time. The presentation finishes with a close shot of the young Belgian singer looking at the camera.

The Netherlands
Trijntje Oosterhuis
Walk Along

Just before rehearsals stop for an hour long break, we are moving next door from Belgium to the Netherlands and Trijntje Oosterhuis with her song Walk Along. Trijntje (I wonder how this is pronounced in Dutch) is a well-established artist in her country – her credentials include being a coach for talent show The Voice of Holland as well as having sung for the Dutch royal family and having worked with names such as Queen, Lionel Richie and Burt Bacharach. The lyrics of Walk Along talk about unrequited love with a friend and are written by Anouk (The Netherlands 2013) who had topped the European charts back in the 90’s with songs such as Nobody’s Wife. There are no fireworks here – Walk Along is instead a coolly understated pop song in a similar way to Calm After The Storm, the Dutch entry and Eurovision runner up from last year. We are now waiting to see whether the Dutch delegation will be able to repeat the excellent job they did staging The Common Linnets and Calm After The Storm back in Copenhagen. 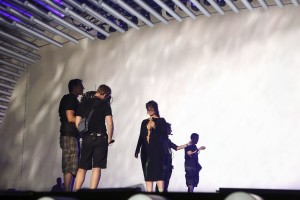 No, understatement goes out of the window for the Netherlands this year. To start with, one thinks that a net veil worn on Trijntje’s face will be the main invention used for the presentation of the Dutch song. Indeed, the song starts with a close up shot of Trijntje ‘s eyes looking straight into the camera under the black veil. The camera soon moves away from the singer’s face to reveal a jaw-dropping low cut black dress that gets quite a reaction in the press centre. To start with, the stage is sub-lit but for the impression of a star made of stardust projected on the stage floor and onto the centre of which the Dutch singer is standing. Trijntje is very strong vocally throughout. At some point, the camera moves around and behind her and, while one’s gaze is attracted by what appears to be another wide cut, this time below the waist of the dress, Trijntje throws her veil on the floor. The stage is suddenly lit in electric blue that sets off the word ‘LOVE’ written on Trijntje’s fingers in fluorescent orange letters – silhouettes of couples embracing are projected in green in the background at the same time. The four female backing singers, informally dressed in black and white, feature more at this point as they move around Trijntje while playing for the camera at the same time. Bright red lights follow before Trijntje turns back to the camera singing passionately and the song finishes with another close up shot of her face. For the last two runs of the song, Trijntje performed shoeless in black net stockings matching the veil she wears in the beginning. This is probably the best vocal performance we heard thus far today but, quite unexpectedly, the presentation of the song was a bit busy (not necessarily in a good way either).

Rehearsals will now take a break. We will back with you in about an hour with the rest of the countries rehearsing today: Finland, Greece, Estonia and F.Y.R. Macedonia. Stay tuned!