Day 1 of this year’s Eurovision and it’s time for some of the countries competing in the first semi final to take to the stage for their first rehearsal. It is now time for Finland, Greece, Estonia and F.Y.R. Macedonia to rehearse their entries. Eurovisionary will be reporting live from the press centre in Wiener Stadthalle.

Finland’s is one of the most eagerly anticipated entries to be seen rehearsing – that does not only apply to today, but to this year’s rehearsals in general. The Finish entrants, Pertti Kurikan Nimipäivät, self-describe as ‘four middle-aged, mentally handicapped men’. Singing Aina Mun Pitää (I’m Do It), Pertti Kurikan Nimipäivät will not only be the first artists with Down’s Syndrome but also the first punk band to perform on the Eurovision stage. Their song is all about life’s must’s and do not’s’ and it notably comes with two English translations from Finish, a literal translation from the group themselves and a freer, more explanatory one from a translator. Having previously been the subject of an award-winning documentary called The Punk Syndrome, Pertti Kurikan Nimipäivät have attracted even more media attention since winning the Finnish national final back in February and it is safe to expect that all eyes will be on them in the next half an hour or so. 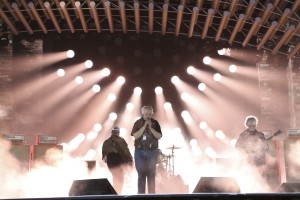 The presentation starts with a flood of flashing, bright white spotlights and some dynamic camera work that fits the energy of the song. There are no surprises here; the set up for Pertti Kurikan Nimipäivät is very similar to the one used for the Finnish national final. The members of the group are dressed casually and look serious but comfortable while performing their song. There are sweeping camera shots around the stage one moment, close shots to the members of the group the next and sequences that hint to shooting with a hand held camera (a bit reminiscent of sequences often seen in a rockumentary) – the overall effect is a bit chaotic but befitting. There is dry ice used and the spotlights occasionally change into golden yellow. The main singer performs with consistency and the presentation finishes with another flood of bright white light.

The Greek entry will in fact be broadcast after a break that, in some countries, will be used for placement of commercials. Cypriot born Maria Elena is representing Greece with the song One Last Breath, an anguished ballad about loss and heartbreak described though some quite dramatic lyrics. Before setting her mind to Eurovision, Maria Elena entered and won the first edition of talent show The Voice of Greece – Maria Elena’s backing singer, Alex Economou, is also an ex The Voice entrant, indicating that the talent show is a great pool for Eurovision material if today’s set of countries is anything to go by. If there is one thing that Maria Elena can do well, that’s strong vocals coupled with an elegant stage presence. It was largely down to her classy, powerful performance during the Greek national final that Maria Elena got the ticket to Vienna and it would be interesting to see how/if that performance has been revamped for Eurovision. 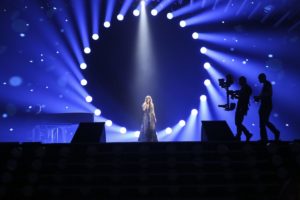 Greece starts really dramatically with Maria Elena standing middle-stage with a full large circle formed by an impression of spotlights behind her in the background. She is discreetly joined on stage by the song’s composer who is playing a white piano next to her. The stage is lit in blue and the white spotlight formation is reminiscent of the old (round) EBU logo. Maria Elena is wearing a shimmering silver dress with a very low cut that one can guarantee will draw comparisons with the frock worn by the Dutch entrant. The dress falls a bit too loosely on her body for its cut and looks a bit stiff when a wind machine is used.  Her vocal performance is spot on but, during the first run, she appears a bit too concentrated. Something goes wrong at the beginning of the second run, which is something that happened to other artists previously, too, and the singer has to start again. Behind the spotlight circle there are sparkling droplets in various shades of blue that are also repeated on the stage floor during a panoramic shot. There is some clumsy camera work during the first run and, on occasion, later on, which probably means that the Greek delegation are still experimenting trying to achieve an optimum result. Indeed, from the third run onwards, there are noticeable changes such as Maria Elena being silhouetted against the background at the very beginning of the song. Right at the song’s crescendo, the background droplets become more animated and resemble an explosion, the stage is subsequently lit brighter while Maria Elena is confidently delivering her song, complete with expressive armography. The presentation finishes with a close shot of Maria Elena, her long hair waving. Even though there has been effort put into the presentation, the overall effect is not yet as polished and elegant as it could perhaps have been – Maria Elena almost missed her camera a few times for example. What can be guaranteed however is Maria Elena’s phenomenal vocal consistency.

Estonia’s is the other eagerly anticipated rehearsal today after the one from Finland earlier. Elina Born & Stig Rästa won their national final by a landslide and are currently tipped as one of the favourites to win this year’s Eurovision Song Contest. Their song, Goodbye To Yesterday, is a melancholic duet about yet another breakup – a recurrent theme in this year’s Eurovision. The lyrics are economical but effective. The first half of the song describes one lover as he is leaving the relationship and, in quite a cinematic way, it feels as if his actions are taking place in real time; from then onwards, the lyrics turn into something of a dialogue between the two protagonists. There is a parallel again to be drawn with last year’s Dutch entry, even more so here as, apart from the understated melancholic mood and American sound, this year’s Estonian entry is also a duet – one of the many that will be taking to the stage in Vienna. 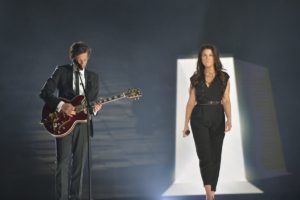 I was planning to keep critique to myself during the first rehearsals, but there is no denying it: Estonia are with it this year. The first run did not go without problems – there appeared to be a mix up with Stig’s microphone at some point – but Estonia has got their presentation concept right. Think of a dark room, think of a door opening letting light in, think of someone standing at the door casting a shadow onto the light falling into the dark room. That’s how the song starts with an overhead shot and Stig being the person ‘standing at the door’ looking dapper in his sharp black suit, white shirt and black tie playing his guitar. The presentation thus makes references to the song’s lyrics but this is carried out in a very stylish way. Soon there is another light and shadow cast in the darkness at an angle to Stig’s – that’s Elina of course. She looks lovely dressed in black and sounds fantastic (Stig sounded a bit flat during the first run of the song). In subsequent runs, the delegation experimented with different angles for the light and shadows effect. It is fair to say that there are more stops and starts during the Estonian rehearsal than any of the other countries so far. The rest of the presentation consists mostly of close shots of the two singers against a glittering golden background singing looking into the camera or at each other – the presentation goes a bit flat here sometimes. Towards the end, the ‘light’ on Stig’s side disappears as if his ‘door’ has ‘closed’. At the same time, the impression of a cityscape appears in the background and Elina is left alone on stage. The only weak point about the Estonian performance might be Stig’s vocals which were a bit shaky today.

F.Y.R Macedonia is the last country that will be performing tonight. Performing after what is widely considered one of the favourites may not be ideal, but the entry from the former Yugoslav republic has a lot going for it. Its performer, Daniel Kajmakoski, got the ticket for Austria after winning The Skopje Festival in his native country. Previous to that, Daniel got to prominence as the winner of the first series of The X Factor Adria, a regional version of the talent show covering most of the region of what used to be Yugoslavia. Apart from his talent, the artist from F.Y.R. Macedonia has the benefit of performing on home ground as Kajmakoski has been living in Vienna since the age of six. Autumn Leaves is about the heartache of waning love; the arc of a relationship is subtly likened here to the changing seasons (summer to autumn) and the associated changing colour of leaves. Whether it has been a conscious choice on the part of the organizers or not, this is another song with quite cinematic descriptions in its lyrics (presented back to back with Estonia). In a few minutes, we will be able to tell whether F.Y.R. Macedonia decided to explore the staging opportunities presented by the lyrics or whether they have opted for a more abstract approach for their presentation. 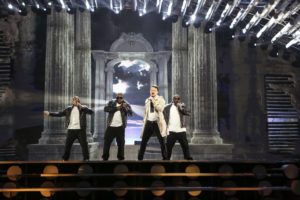 Let us get one thing out of the way. Daniel is a really charismatic performer who not only sings beautifully but also dances really competently and plays well to the camera. There is a single camera frame used all the way through the first run – one assumes because the delegation are still studying the performance. Daniel is wearing black trousers, a white shirt with a black leather detail on the front and a cream coat (as I am about to say that I love the coat, my Turkish colleague says it makes him look like Inspector Gadget). He starts alone on stage but is soon joined by Blackstreet, the R’n’B trio supporting his performance. They carry out quite an intricate choreography that gives the song a more contemporary feel compared to when heard in isolation. Kajmakoski loses the steps of the choreography during the first run but recovers swiftly. In the background, there is a tall classical portal complete with columns reminiscent of Renaissance architecture; through the gate, a blue sky with moving white clouds is progressively turning darker before changing into a golden sunset (or sunrise) while the impression of brown leaves fly about. The metal rods framing the stage are lit in waves of blue and white, contrasting with the oranges and yellows used in the background. There is some experimentation going on with camera angles during the first runs. For the last couple of runs, the song starts with an overhead shot of Daniel seemingly standing on a bed of brown, golden and red fallen leaves. As the runs progressed, Daniel’s voice sounded a bit strained and, having to give a demanding performance time and again, he should make sure that he saves some of his energy for the semi final. All in all, a very pleasant close to this first day of rehearsals.