Several Ukrainian cities have expressed interest in hosting the 2017 Eurovision Song Contest, but only two of them are able to meet the requirements set by EBU. We take a look at what these cities have to offer.

Ukraine is likely to be hosting the 2017 Eurovision Song Contest as a result of Jamala’s victory with her entry 1944 leaving behind jury darling Dami Im from Australia and the TV viewer favourite Sergey Lazarev from Russia.

The preparations are in full swing in Ukraine. EBU representatives met with the head of the National Television Company of Ukraine (NTU) in order to discuss if it is considered likely that Ukraine can and will host the contest in a satisfying way.

So far, several cities have expressed their interest in hosting the event, but only two really seems capable of meeting the requirements about hotel capacity, a suitable venue, placement of press centre, Eurovision Village, EuroClub and also a good infrastructure. 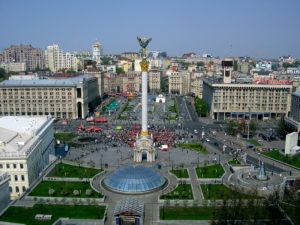 Airport ~1 hour from the city centre

As we all remember, Kyiv was the host city of the Eurovision Song Contest 2005 as a result of Ruslana bringing Ukraine its first win. The event took place at the Palace of Sports.

The city has been one of the main candidates due to it being the capital and having hosting the event before. It will have a larger hotel capacity than any other city.

However, the venue Ukraine used for the Eurovision Song Contest in 2005 is considered outdated and is a current back-up plan in case a quick decision has to be made. After its renovation in 2011, it can only fit just about 10,000 people and question is if that will be considered large enough.

The venue currently being considered the main priority for this city is The Olympic Stadium with its capacity of over 70,000 people. It does not meet the requirements from EBU due to the lack of roof.  The plan to install the roof is currently being discussed. From experience from other countries we however know that a roof can be made in time for the contest.

See alsoHow much does taking part in Eurovision cost? 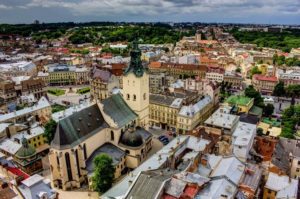 Lviv is located in Western Ukraine, just about 80 km from the border to Poland. Being one of Ukraine’s most visited cities by Europeans and its ability to accommodate as well as its Central European spirit makes this city a potential host. Just like Kyiv, the city’s main venue Arena Lviv, that was built exclusively for the football championship EURO 2012, lacks a roof. Ruslana, the winner of the 2004 Eurovision Song Contest spoke out supporting Lviv as the host city.

Other cities such as Odesa, Kherson and Dnipropetrovsk aren’t up to standards and would require remodeling of venues, aiports and hotels before moving onto the next step. All in all, Kyiv’s Olympic Stadium and Lviv’s Arena Lviv are currently the only options being seriously considered by the Ukrainian broadcaster as host for the 2017 Eurovision Song Contest.

How to choose a host city:

The Ukrainian broadcaster NTU will have received a list of requirements set by the European Broadcasting Union. The cities interested in hosting will usually submit their bid to the broadcaster addressing how they meet their requirements. Based on that the broadcaster make a short list of the possibilities and invite EBU representatives to take a closer inspection and provide feedback. Based on this the broadcaster officially submit their chosen host city and venue, which will then have to be approved by the EBU. Once approved, it is ready for a public announcement.

It is expected that we will get the final announcement during this summer.